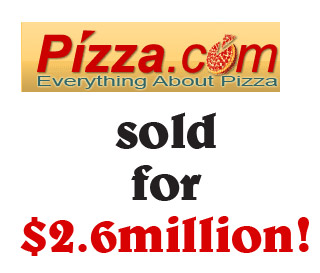 Has anybody ever thought that any domain will be worth USD 2.6m? Get shocked! Last week domain Pizza.com was sold for as much as $2.6m.

An anonymous bidder has purchased the domain after a week long auction. The auction started on March 27. The bidding began at $100 and finally was sold at $2.6m.

Chris Clark, 43, the previous owner of the Pizza.com had purchased the domain in 1994, when the world wide web was about to flourish. With Pizza.com Clark hoped to get a contract with a pizza firm for his consulting company.

Even after selling his business in 2000, Clark maintained the domain by paying $20 every year. He used the website for selling advertisements since then.

“It’s crazy, it’s just crazy,” an ecstatic Clark told Baltimore Sun newspaper. “It will make a significant difference in my life, for sure,” he further added.

Clark also owned the domain, vodka.com, which he sold in 2006 for $3m. This raised an interest of Clark to see Pizza.com’s potential. Hence he decided to sell off the domain in January 2008.

“I thought, ‘Why don’t I just try to see what the level of interest is?'” Clark said. “If someone’s willing to pay that much for Vodka.com, maybe there’s more interest in pizza.com.”

Furthermore, Clark regretted on not buying more of such interesting domain names in the 1990s.