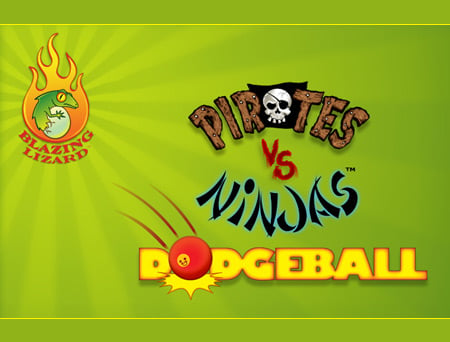 Up to 8 players get an opportunity to pick from 5 unique teams and battle it out against one another in the ultimate sport of champions – Dodgeball. Till now only 2 teams have been christened, called Pirates and Ninja, while the other shall be revealed later. Though it is dubbed ‘Dodgeball’ this is altogether a different dodgeball game. As against the conventional game, teams are not confined to one side of the court; instead they roam freely around 6 beautifully detailed arenas. What’s more, characters are equipped with combat moves and special capabilities to deliver a more action-packed experience than could ever be found on the playground.

Infyrno, Blazing Lizard’s next-gen proprietary game engine has been integrated into Pirates vs. ninjas Dodgeball. This makes possible interesting gameplay with an art style and theme suited for all age groups. There will be Exhibition, Story, and Challenge modes and multiplayer support for 4 players Local / 8 players Online, and 4-player Co-op modes.

Chris Stockman, Studio Director of Blazing Lizard said, “What more needs to be said when it comes to Pirates vs. Ninjas.” Stockman added, “This is the ultimate in rivalries, and we aim to have them settle it with all out balls to the wall action.”

Though Blazing Lizard’s has not revealed as to what platforms will they be launching Pirates vs. Ninjas Dodgeball, what’s know is that the title is slated for a release in Q1 of 2008.