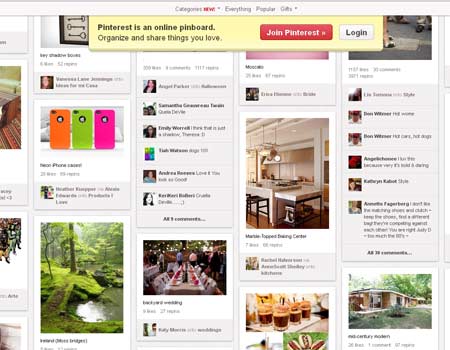 Unlike previously when an official invite was required for signing up with Pinterest, the California-based social photo sharing website is now accepting registrations with open arms. Interested users will not only be able to join the service through their Facebook and Twitter IDs, but also via personal email addresses.

The procedure to sign up is rather simple. From the main page itself, viewers will be presented with join and login options amongst the regular content. Clicking the former allows visitors to select the mode of registration, that’s Facebook, Twitter or a personal email address. Selecting the first 2 requires authorization through the respective website, while the latter method is similar to most social network sign up pages.

“Today we’re thrilled to announce open registration! For those of you who haven’t joined Pinterest yet, this means you can sign up without waiting for an invite: all you have to do is go to Pinterest.com to get started. In addition to using your Facebook or Twitter login, we’re also opening registration so you can sign up with just your email address. We’re really excited to have the capacity to offer Pinterest to more people and if you’re a Pinner with friends who’ve been waiting on the sidelines, we hope you’ll let them know,” reads a post on the official Pinterest blog. 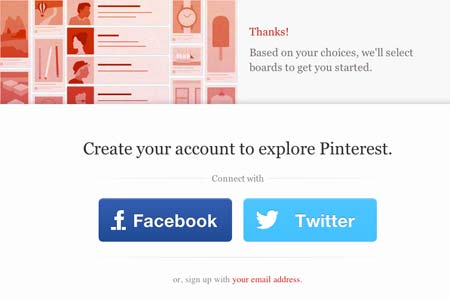 A brief description of Pinterest and its features – Launched back in 2010, the service allows users to organize and share images with others through pinboards. Viewers can re-pin pictures to their own collection, ‘like’ photos and also comment on them. The service is available for mobile platforms such as Windows Phone and iOS supporting devices like the iPhone and iPad running iOS 4 or later.

As stated above, those wanting to signup up with Pinterest can now do so without an invitation through the website’s registration page.