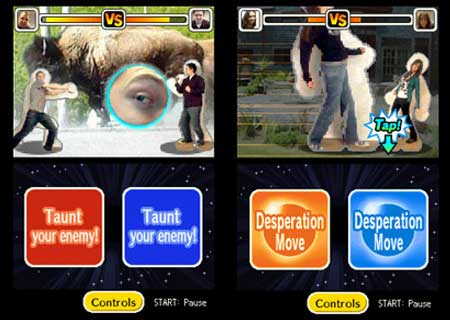 Want to roam the countryside showing off some deadly kung fu moves, fight as a brave worm or just relax with a game of chess? Well, players will be able to do just that and more as Nintendo hits the DSi system with Photo Dojo, Earthworm Jim, Chess Challenge and Flips: The Enchanted Wood.

Photo Dojo allows gamers to fashion their own dojo packed with fighting machines by utilizing pictures of the player as well as their friends and families taken via the system’s integrated camera. Through the built-in microphone, they can also record innovative sound effects and dialogue for their warrior. They can opt from four available fighting styles and then christen the character with a wacky name. Gamers can lineup up to eight fighters and even personalize backgrounds and soundtracks. Two players can also fight each other via a single Nintendo DSi system. The game offers players a new twist to the side-scrolling fighting genre that has captivated the terrain for quite some time.

Earthworm Jim is published Gameloft and is noted to be a singe player game. This classic action platformer was previously enjoyed in the Super NES system. The game now comes to the DSi packed with new elements specially created for the portable system. Gamers take on the role of the brave earthworm Jim as he bungee jumps, hurls cows, swing from hooks and rocket through loads of fun levels spanning across different universes. Players can acquire special bonuses with challenges that are based on facial expression thanks to the built-in camera. They will have to make a variety of faces in order to mimic whatever expression Jim is putting on.

After taking on the universe, why not sit back and relax with a game of chess? Published by Digital Leisure, Chess Challenge! enables players to test their chess skills against the computer in different difficulty modes. They can even play against friends and family through DS Wireless Play. Gamers can even track all their game-play statistics whether it’s a win, loss or draw. Chess Challenge! is expected to keep both novices as well as experts tied up for hours on end.

The final entry for the DSiWare is Flips: The Enchanted Wood published by Electronic Arts. Here is yet another fun-filled way to enjoy stories. This particular one sees Fanny, Jo and Bessie moving to the country only to find an Enchanted Wood where the magic Faraway Tree resides. The tree is home to magical characters like Silky the fairy, Saucepan Man and Moon-Face. They make friends with the three children and together they embark on exciting adventures. They visit strange lands like the Land of Ice and Snow, the Roundabout Land, Land of Take What You Want and Toyland. While enjoying the title, players can also learn, solve, interact and collect items along the way via various challenges and stories.