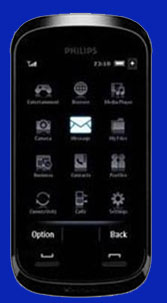 After all the touchscreen models launched by other brands, Philips did not want to be left behind either. Philips has stepped into the mobile arena with a new sleek touchscreen model named Philips X800 which gives a touch of professionalism with a dash of a trendy look as well.

With similar looks of the HTC Diamond, the Philips X800 presents itself with soft round edges and a respectable 2.9 inches touchscreen display. The phone is feature-packed with advanced technologies like quick HSDPA, Wi-Fi connectivity, tri-band GSM/GPRS capabilities, a built-in GPS system, Bluetooth and also microSD expansion slot for the high data storage requirements.

The Philips X800 has a good quality 2MP camera with auto-focus, providing an impressive 8 hours of talktime and 850 hours of standby time and one can enjoy 3G web surfing as well. The phone runs on Window Mobile operating system but the version is not mentioned as yet. The phone has been designed very well by paying careful attention that the touchscreen occupies most of the space and only little space has been given to the frame of the phone, thereby giving the phone a bigger look than the existing touchscreen phones.

The pricing and availability of the phone yet remains a mystery. It can make itself a hit provided it launches before the revolutionary 3G iPhone.