Philips will be the next to flip out, Xenium W9588 phone on the cards

Flip phones are making a comeback in certain markets (thanks to LG and Samsung?) and it looks like Philips wants some too. A certain Xenium W9588 has popped up in the gossip circles and appears every bit a modern Android clamshell as fans of this form factor could expect it to be.

This is the second Philips flip phone to hit the rumor mill over the past few months, the previous one being the rather angular W8568. The Xenium W9588 takes on a rounded, rectangular exterior with traces of ‘exquisite gold,’ according to the leak in question. 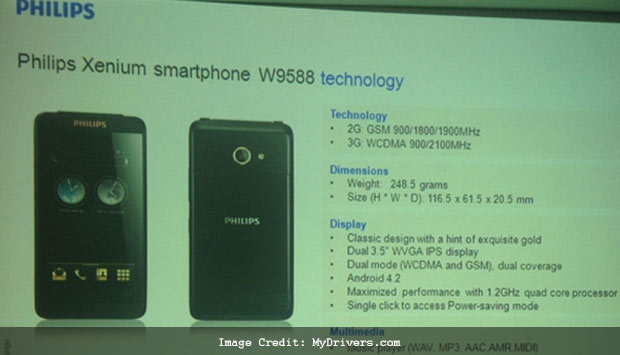 Unwired View which dug up this news through MyDrivers, notes that the handset would be placed in the mid-range shelf in China, the region where it is set to debut. Of course, the design will mean users will have to put up with a pesky 248.5g weight. Compare this to the 132g light iPhone 5C. Why? No reason, they’re not in the same league anyway.

So here’s a quick glance at the reported specifications of the phone:

If you’re sold on the Xenium W9588 and live in China, good news – it’s apparently lined up for a release sometime in the near future. But don’t assume it’s going to come cheap. We’ve all made that mistake before.