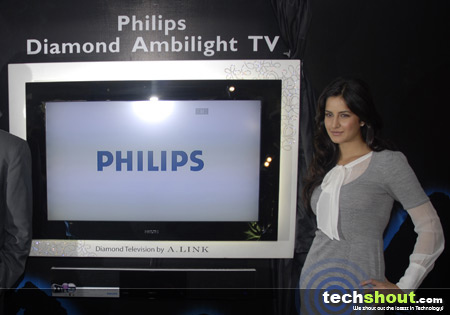 Today, Philips Electronics India held a press event for the media which turned out to be a starry one that had everyone’s eyes glittering with desire. Wondering what is Philips’ latest offering? Read on to find out the connection between Katrina Kaif and diamonds and of course Philips.

The main product that was unveiled was the one-of-a-kind diamond-encrusted Ambilight FlatTV. This 42-inch Ambilight LCD HDTV has been crafted in conjunction with New York-based jewelry company A.Link.

This sparkling TV was unveiled by someone who has an equal amount of sparkle in her smile- India’s very own Katrina Kaif. The shocking thing is that this TV will not actually be available on a commercial basis.

What makes the Philips Ambilight FlatTV special is the fact that it features 225 carats of around 2250 individual diamonds set into a graceful stylized floral pattern around the edges of the frame.

Even more special is the fact that Philips has specially developed this sparkling TV as a unique and one-off celebration of the millionth Ambilight FlatTV.

Mr. S Nagarajana, Vice President- Consumer Electronics Division, Philips Electronics India was present at the event. He said, “One million is a significant milestone for a premium television. It demonstrates that consumers are seeking an exceptional viewing experience which only Ambilight can provide. We are proud to host the Diamond Ambilight FlatTV in India and showcase its artistic brilliance.”

The diamond-encrusted Philips Ambilight FlatTV is undoubtedly the most expensive TV at a whopping price of $150,000 (Rs. 59,03,250). This single piece will be shown at different events around the world and will finally be auctioned off to charity sometime later this year. 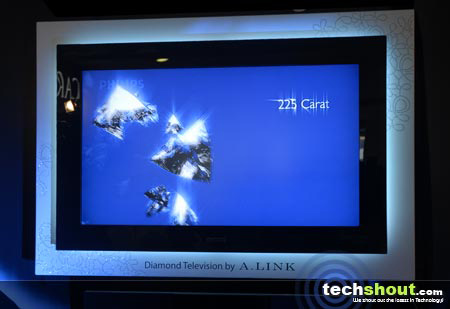 Besides displaying this sparkling Ambilight FlatTV, Philips also announced the launch of something more tangible in terms of money for its Indian customers. Unveiled was a new range of Ambilight FlatTVs that feature new LED illumination and proprietary Perfect Pixel HD Engine technologies. 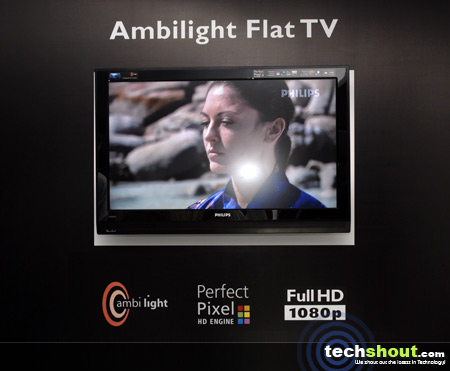 These Ambilight FlatTVs have a Full HD screen display of 1920x1080p resolution, and are thus able to deliver unmatched picture quality and the most immersive viewing experience.

Also making these TVs special is the fact that the entire line-up is more energy efficient than the previous range, and this is only been made possible due to the innovative LED light source.

Not only that; the Ambilight FlatTV range is also future proof, which means consumers can experience the future of HD content in 1080p resolution through a variety of sources such as gaming consoles, Blue-ray players and media center PCs.

Mr.Gunjan Srivastava, Director Consumer Electronics Division, Philips Electronic English, “Realizing the phenomenal response that we have received from Indian consumers for the Ambilight range, we believe that it is this technology that will help us attain a technological edge to achieve leadership in the LCD segment.” 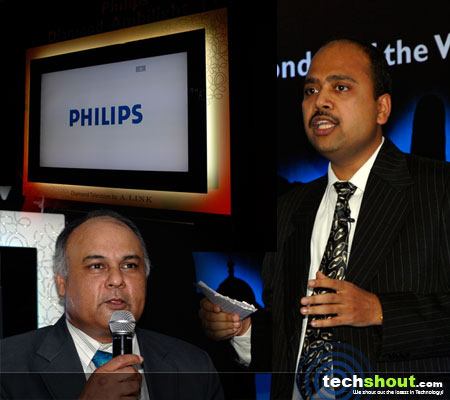 As part of Philips’ ‘Rocket Jalao, Gadi Chalo’, customers are entitles to an assured gift with every purchase. Additionally, the company is also offering unique Rocket Scratch Card with every audio visual product.

It doesn’t end there because around 63 Lucky customers will get to drive home with a brand new car including 51 Altos and 11 Maruti SX4. The bumper prize for one lucky customer will be a brand new Grand Vitara.