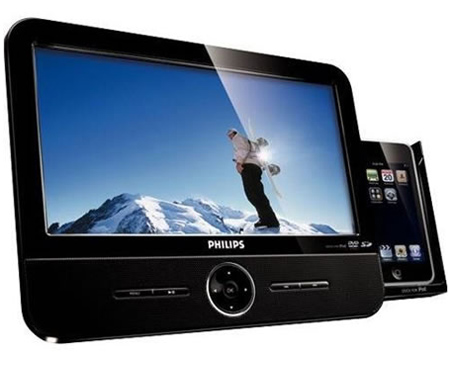 Philips has revamped the design of its DCP951/37 Docking Entertainment System. The system can not only be your best companion whilst cooking up those pastas in the kitchen, but can also help stress-busting when you are in the study calculating those numbers or writing your next short-film’s script.

The player sports a tablet form and has the ability to stand up on its own, bidding goodbye to the normal clamshell style. A 9-inch diagonal LCD screen and integrated stereo speakers are the key features of the all-new Philips DCP951/37 Docking Entertainment System.

Now what’s most interesting is that the system incorporates a handy iPod dock/charger that is hidden in the side of the player, till you actually pop it out. The system plays files from DVD and iPod and additionally includes a built-in SD/MMC card slot to play stuff loaded onto the memory cards. It is compatible with the DVD, DVD+/-R and DVD+/-RW, (S) VCD, DivX & MPEG4 video formats. The system has a 640×220 resolution, which can be regarded as its biggest and perhaps only con.

The Philips DCP951/37 Docking Entertainment System packs in a rechargeable battery that plays 2.5 hours of video on a full charge. The player can be purchased via Amazon for $199.99. Quite a steal, don’t you think so!