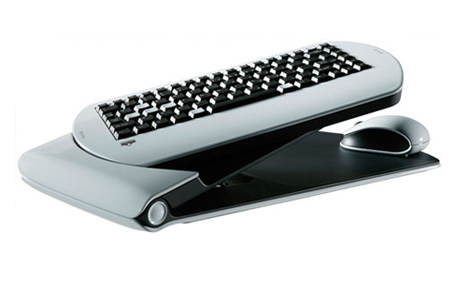 Phantom Entertainment has developed a new bundle of wireless keyboard and laser mouse. This newly designed combo comes along with a hard surface below. And we believe that Phantom is planning to launch this soon.

It is claimed that the Leopard bundle of keyboard and mouse is made for people who prefer to operate computers while relaxing. Naturally, the peripheral is ideal for playing games.

The device supports Wireless 2.4GHz RF and can be operated within the range of 32.8 feet or 10-meters.

Apart from wireless technology, Phantom Leopard is further equipped with, one-touch interface volume up, volume down and mute key functions. Moreover, the keyboard offers convenience for right as well as left handed users with its ability to rotate 360 degrees.

The keyboard also inclines on a 22-degree angle with a hard surface allowing the phantom mouse to be placed and functioned below the keyboard and on the hard surface. The mouse has three buttons namely left and right click-buttons with scroll. Also the mouse is compatible with lapboard mouse surface and most table tops.

What is more exciting is that the leopard keyboard features interchangeable key-face technology especially developed for game specific and business software applications for PC or Apple Max platforms.

Phantom Leopard is compatible with Windows 2000, Windows XP, Windows Media Center and Apple OS X operating system is believed to be available in the American market at $130.