Pew: Tablet and eReader doubled in the US amongst adults this holiday season 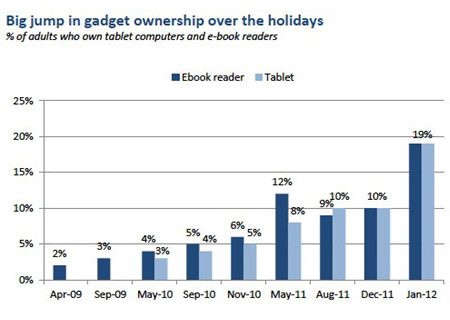 Those who have purchased or gifted a tablet or a eReader to family, friends and colleagues over the holiday season, have contributed to the increased ownership of these devices amongst adults in the US. Besides this, digital reading gadgets have shown an overall increase of 11% in the country, says Pew.

Going by a survey conducted between mid-December and early January, tablets sales have apparently increased from the earlier recorded 10% up to 19% over this holiday season. eReaders also share the same fate as the aforesaid portable computers. Based on the report published by Pew, these devices showed a growth of 9% amongst adults during the same period.

The overall ownership count for digital reading devices in the US has apparently jumped from 18% in December to 29% in January. The arrival of the holiday gifting season seemed to have triggered the sales of tablets and eReaders. During the period of mid-2011 into the autumn, purchases of these gadgets didn’t show much change.

The unexpected increase in tablet and eReader ownership is most likely due to the introduction of cost effective products like the Amazon Kindle Fire, and Barnes & Noble Nook tablet series, which were priced considerably lower, whilst some versions of the aforementioned gadgets fell well below the $100 mark.

Derived through from ongoing surveys that are being conducted by the Pew Research Center, this report is said to comprise of information collected from 2,986 people that were aged between 16 years and older. Focusing on the ownership of both devices, it was carried out during the months of November 16 and December 21, 2011.