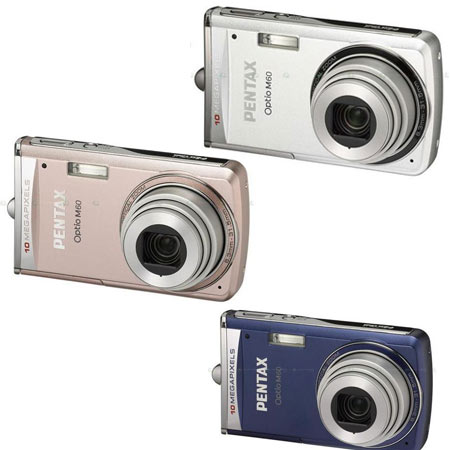 After introducing a new entry level E60 digital camera for beginners, Pentax has announced to launch its new Optio M60 digital camera. The camera sports a 10 megapixel resolution and a 5X zoom lens.

The new Optio M60 is the successor of the M50 camera. The M60 includes many improved features including a face recognition function that is capable of recognizing up to 32 faces at once.

Moreover, Pentax has added “Auto Picture” function that is especially made for beginner photographers. It automatically detects the condition of the subject and selects suitable scene mode for it. The camera includes various different scene modes such as Landscape, Portrait, Night Scene, Night Scene Portrait, Standard, Flower and Sport. Even new Candlelight mode is included in the M60.

The camera also comes with a panorama mode for composing multiple photos into one panoramic picture, a movie recording function with shake reduction and red-eye compensation function for flash shots. The Pentax M60 has a 2.5-inch LCD display and 36.5MB of internal memory.

The Pentax Optio M60 will be available in three silver, pink, and blue colors and is expected to be available from August 2008.