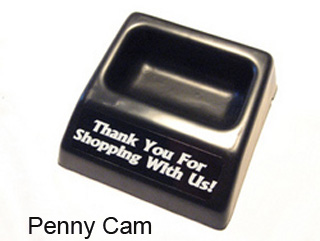 Isn’t it very obvious that the CCTV cameras that are placed above your heads have never given a clear image of anyone’s face simply because they are not placed in that direction?!

But now, what the CCTV cameras can’t give you, that will be provided by a “Take-A-Penny, Leave-A-Penny” tray – the high resolution image of the suspect taken from the closest proximity.

Yes, a “Take-A-Penny, Leave-A-Penny” tray will do the work for you and the police officials in case of robberies and thefts!

StealthVue presents a ‘new covert countertop surveillance device’ – the Penny Cam that uses a high-resolution security camera perfectly disguised inside the tray, and that faces directly to the suspect’s face. Since the Take-A-Penny, Leave-A-Penny tray is found on most of the gas station, convenience and liquor store countertops, StealthVue used it to turn into a security camera. And it just not another security camera, it provides images with quality superior than the normally used security cameras give, saving you from the trouble of figuring out faces from pixilated inferior quality useless images.

“The images these cameras produce are far superior to most security camera photos we are provided with during robbery investigations,” says Shanne Richardson of a Southern Nevada law enforcement agency. “If more businesses would install cameras like this, it would have a dramatic effect on the number of apprehended criminals.”

The Penny Cam is unique as it gives images of the criminal that the “standard overhead security cameras simply cannot match.” It has an upward viewing angle that the overhead cameras do not have and it is very easy to install and can also be integrated with the normally existing surveillance systems.