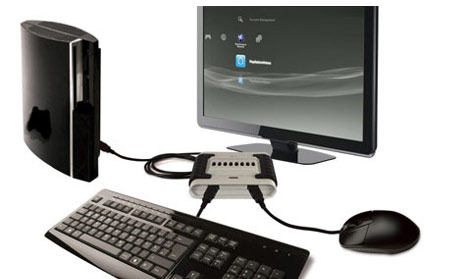 It goes without saying that gamers need to be adequately armed when playing FPS games. Penguin’s latest offering namely the Eagle-Eye converter for the Sony PS3 gaming console does just that. Transforming a regular USB HID keyboard and mouse into a weapon of choice, it allows the peripherals to be used as turbo-charged controller.

Users are offered key mapping features which allow all of the PS3’s controller buttons to be personalized. This should allow data to be seamlessly transferred to the mouse and keyboard. Gaming enthusiasts can look forward to precise movements when playing games like Killzone 3, BioShock and Call of Duty: Modern Warfare. Penguin claims users will gain higher speeds in comparison to a regular controller thanks to the converter’s enhanced features.

“One of the drawbacks with playing first-person shooters is the lack of speed and accuracy offered by traditional controllers,” mentioned Richard Huang, President of Penguin United. “We found a simple solution by bypassing the controller and transferring the button features directly to the computer keyboard and mouse. The Eagle-Eye offers an amazing alternative for fans of shooting games.”

Capable of accurately transmuting into a PC mouse, the converter shows a 1 to 1 translation from a PS3 controller to a mouse. The game option menu allows users to effortlessly tweak the sensitivity of the mouse. Thanks to the one to one translation straight from the PS3’s right analog stick to the movements of the mouse, gamers should get a good aim when playing FPS games. With a left analog stick for customizing control, the device additionally includes software that details all of the PS3’s buttons.

Infused with USB 2.0 keyboard and mouse inputs, the right analog stick is capable of defaulting to movements. Users can connect the device to any console version of the PS3 using the 2 feet USB cable. The converter features a Turbo option for the square, triangle, circle, X, L1, L2, R1, R2 buttons. In addition to this, the device also reveals Programmable Macro Functions that can convert one key into a combination of moves.