As expected, Pebble took the wraps off a new smartwatch which has been aptly named as Time. Of course, the accessory will do much more than tell you the current time and it’ll offer a lot more compared to what the original device had in store.

The Pebble Time has also taken the same route as its 2013 predecessor. The company has launched the new device on Kickstarter where it has been met with an overwhelming response. The main funding goal has been set at $500000 and in just a single day, the device has managed to secure nearly 40000 backers and raise almost 8.5 million, shattering previously set records. 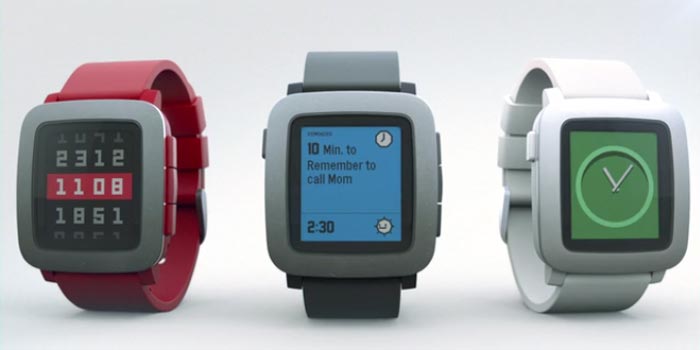 And there’s a good reason why the new Pebble smartwatch is getting so much attention. The device is a huge improvement over the previous model and it packs a better display which now offers visuals in color. It’s still an e-paper panel and this gives it an advantage over LCD and OLED screens found on most smartwatches as the power consumption here is minimized to a great extent.

The company notes that the Time is capable of up to 7 days of battery life, while the competition can barely make it through a single day on a full charge. The device also feature voice recognition which lets you reply to notifications. This capability is enabled for various Android apps like Hangouts, Gmail, Facebook Messenger and Whatsapp to name a few, but currently only on Gmail for iOS devices.

Design-wise, the new Pebble smartwatch will continue to offer a water-resistant form factor. On the upside, the company has made it 20% thinner at just 9.5mm and has also given it a curved design for a comfortable fit. The display is coated with scratch-resistant Gorilla Glass and is surrounded by stainless steel.

Additionally, the company notes that you can customize the Time by hooking it up to standard 22mm watch bands and it takes just about 10 seconds to make a swap. Where compatibility is concerned, the device will work on the iPhone 4S running iOS 8 and newer devices as well as Android 4.0 and above powered smartphones and tablets.

The Pebble Time will carry a commercial price of $199, but you can get it for just $179 through Kickstarter ($159 early bird specials are all gone). There are still 30 days left to go for the project to get funded, so be sure to check out the campaign page for updates and more information on the accessory.