You can count Pebble amongst the most successful smartwatches so far. It had its humble origins as a Kickstarter campaign and then moved on to mass production and market launch this year. After reaching AT&T and Best Buy, the device has hit availability status through online retailer, Amazon.

It couldn’t have got the timing more right. But then, it’s a smart watch. If you’re going to spend around $150 on a present, then it’s a perfect gifting idea. Think about it – who doesn’t own an Android or iPhone handset these days? Now they won’t need to keep whipping out their phone to check for updates.

The wearable can show text messages, email notifications, caller ID, calendar and certain apps. You can also download watch faces and applications for it. The interface allows users to control tracks being played on iTunes and various music services. Just recently, the manufacturer dropped in with an update for iOS 7 called Pebble v1.3.0.

The refresh basically supports all alerts with help from iOS 7’s improved notification capability. One of the best things about the smartwatch is its 1.2” 144 x 168p screen with backlighting. It is an e-paper display which consumes a low amount of energy and lets the Pebble run for about a week without needing to be recharged.

The gadget has its very own Pebble OS and hides an 80MHz ARM Cortex-M3 processor. It connects to your smartphone via Bluetooth 4.0 and features a 3D accelerometer, ambient light sensor and e-compass. Here’s the Amazon link to its product page. 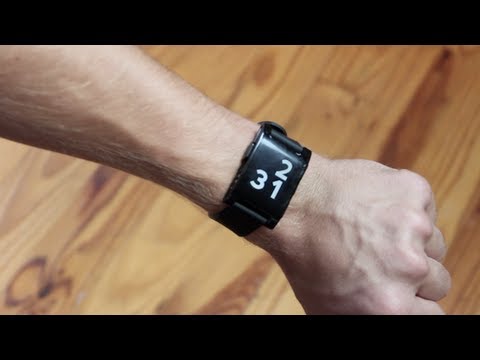