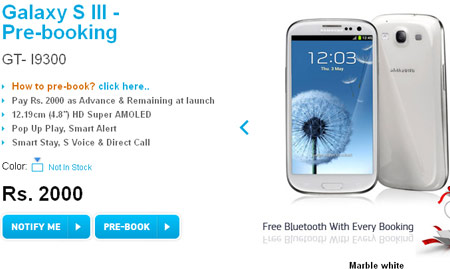 Tough luck for a lot of people trying to hit the Samsung Galaxy S III pre-order button for a pebble blue phone. There have been reports about the South Korean manufacturer apparently struggling under the heavy demand for the blue hued device. Of course, this may not be the only explanation for Samsung’s troubles on the said front if certain stories about faulty rear cases are to be believed.

And it doesn’t get more official than the company actually doing away with the blue option on their pre-bookings page, as is the case for India. Previously, visitors were given the choice to pick either of the two colors in which the smartphone was offered up initially. Yes, we just said ‘previously.’ A little digging around the web seems to indicate that retailers around the globe are either unfazed by the issue or waiting until they get an official confirmation before pulling the pebble blue unit off pre-order shelves. 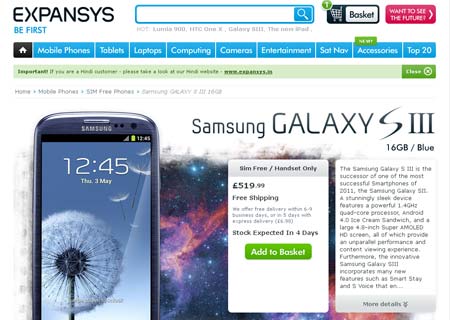 As far as we can see, Amazon US still has the $800 blue Galaxy S III up for pre-ordering and it’s a similar situation on Expansys USA, though the price is $695 for the same. In the UK, Expansys is still vending the handset in the ‘color to vie for.’ Carphone Warehouse is currently showing an ‘Out of stock – Back order’ sign to those who attempt to reserve the unlocked device in either of the two shades. At the same time, only the marble white version was up for grabs a couple of hours ago.

We still have to receive official word on whether those who went for a pebble blue Samsung Galaxy S III pre-order will be requested to reconsider their color of choice or wait for much after the actual launch date to receive their preferred unit.