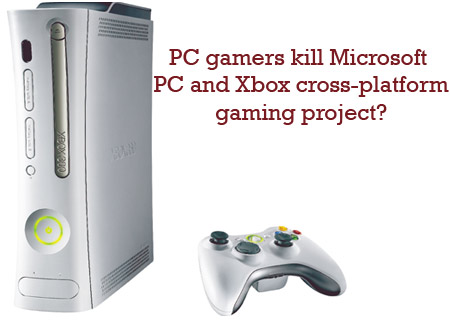 It doesn’t stay quiet on the PC vs console front-line for too long. ‘A fresh and brutally honest perspective of business in the computer industry’ has churned up some new rumors for avid gamers to debate over. Rahul Sood’s official blog says that Microsoft could have dropped plans to bring Xbox and PC gamers into one cross-platform gaming environment since PC gamers turned out to have better gaming skills as compared to their Xbox counterparts.

Microsoft apparently had plans to develop a platform that would allow PC and Xbox gamers to face off against each other in a connected environment. The officially unconfirmed story ends with the company ditching the project after average PC gamers equipped with keyboards and mice beat console-toting gamers at the same game. Sood is obviously lamenting over ‘what might have been’, had Microsoft gone ahead with the project.

The blog went on to explain that Microsoft probably pulled the plug on this initiative in order to save the Xbox team some embarrassment. Though PC gaming may not be in a bad position, Sood feels that PC games could do with more developer and gamer attention. Apple seems to be taking a juicy bite out of this dogged adherence to promoting the console over PC, according to him.

Game developers have been asked to follow the money and look to the future. Apparently, people don’t know what they’re missing since gaming appears to be moving from large productions to indie app developers who tend to offer less than impressive content. Leveraging the benefits of every bit of hardware in order to develop immersive titles could be the key to raising game development standards.

Sood’s latest remarks seem to have fueled the PC vs console debate that has been doing the rounds for times immemorial as proven by reader comments. Many stick by the idea that a console cannot match the precision and control afforded by a keyboard and mouse.