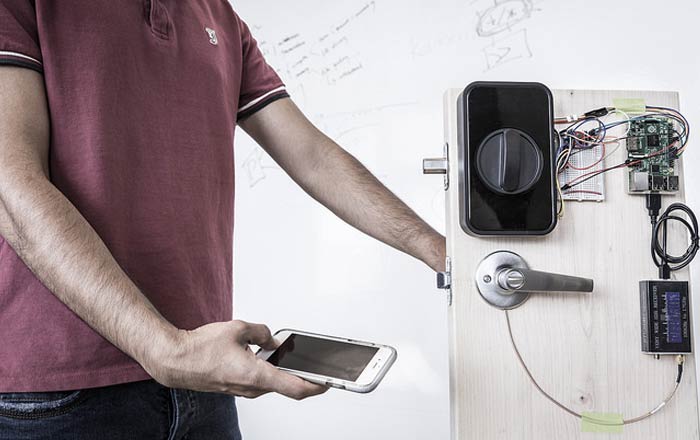 Fingerprint sensors have become all the rage amongst smartphones nowadays, with even entry-level phones getting in on the scanning action. While their utility has so far been restricted to the handset itself for the most part, a new method could potentially make way for them to be used as a means of unlocking things like doors.

Researchers at the University of Washington have come up with a way to send secure passwords through the body. The system does away with the need to send codes through the air via Wi-Fi or Bluetooth, techniques which can be easily intercepted and hacked. It also eliminates the conventional method of inputting a pattern or text.

Instead, computer scientists and electrical engineers at the university plan to utilize harmless low-frequency transmissions generated by everyday fingerprint sensors and touchpads. As senior author of the study Shyam Gollakota puts it, these scanner are usually implemented as input devices, but the new system re-purposes them to send out information by way of the body.

For instance, a person could open a door by touching the doorknob with one hand and their handset’s fingerprint sensor with the other. This action would trigger the beaming out of secret credentials through the individual’s body without any of the sensitive data getting leaked over the air.

The team behind the technology has so far tested it on iPhones, Lenovo laptop trackpads, and Adafruit capacitive touchpads. Evaluations were conducted among 10 subjects of different heights and weights. The technique apparently worked even when they were in motion doing things like walking or moving their arms.

The ground-breaking innovation may even be used in association with identity-seeking medical equipment like as glucose monitors or insulin pumps. Speeds so far have touched 50 bits per second on laptop touchpads and 25 bits per second with fingerprint sensors. This is easily fast enough to transmit a simple password or numeric code through the body within seconds.

Being Alone During Pandemic Actually Benefited Many People: New Research