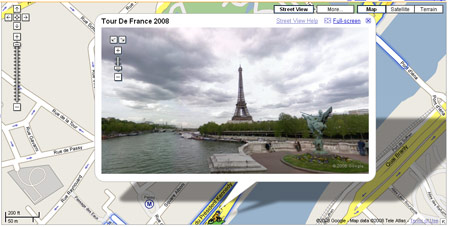 After indtroducing the Privacy Link on the home page, Google had some more announcements. Tour De France 2008, the world’s largest cycle race is now added on Google Street View feature, which is found in Google Earth and Google Map applications.

The Tour De France 2008 cyclists start for the long tour from the French city of Brest, Google has updated the Street View with the route of the famous summer event.

The french bicycle tour route goes through French countryside, enters in Italy at the 15th stage and comes back to France in 16th stage. Finally the Tour De France 2008 tour will conclude at Paris on July 27th.

With Google adding the new Street View of the 2008 Tour de France route. Sports enthusiasts are now assured of not missing their favorite summertime sport.

Tour de France fans can head for the online tour view with just few clicks of mouse at google.com/tourdefrance2008.