Pantech Pop Up Note could be a great Galaxy Note alternative, could use a better name

Pantech which is one of the top smartphone makers in Korea is planning to launch its Pop Up Note smartphone as a top-tier phablet. There’s no word as yet on when the device will be officially launched, but rumor has it that we could see it happen in the near future.

The Pantech Pop Up Note is no successor to the Vega Secret Note that went official back in October. Instead, both devices share common features, but very different designs. The upcoming handset has a rectangular form factor which looks to be on the slim side. 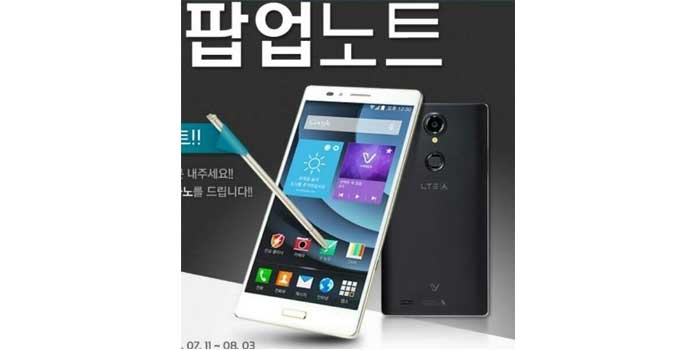 A 5.5-inch display is fitted onto the front with 1080p visuals and it’s accompanied by a 2MP camera. There’s no mention of what lens is on the rear, but you can expect a 13MP shooter. Apart from this, a fingerprint reader and stylus support are clearly visible in the above image sourced by Japanese website Blog of Mobile.

PhoneArena notes that the device will be powered by a 2.3GHz quad core Snapdragon 810 chipset and have 2GB of RAM. Pantech is also planning to launch a 2K smartphone under its Vega brand. The device has been leaked as the IM-A888S carrying a 2.5GHz Snapdragon 805 SOC with 3GB RAM and 32GB storage. Another Vega device was also rumored, but with a 64-bit Snapdragon 810 chipset.

Here’s what we know about the Pantech Pop Up Note’s specs:

The Pantech Pop Up Note is most likely to go official in the coming weeks and like other devices from the company, it might never be released outside South Korea. Also, SK Telecom will reportedly hold exclusivity over it.

Facebook
Twitter
Pinterest
Linkedin
ReddIt
Tumblr
Flip
Previous articleThese are the clearest images of the Sony Xperia Z3 so far
Next articleBlackBerry QWERTY phones get cheaper in India with price cuts for 9320, 9720 and Q5