Targeted towards those who use require their gadgets to handle all kinds of rough situations, the Panasonic Toughpad FZ-B2 is a new Android tablet that will begin its journey in Europe this December. In the said region will be sold at £591 + VAT, while its price in the US will be marked at $1300 when it’s released there in February 2015.

The Toughpad FZ-B2 is actually a 7-inch tablet with a screen resolution of 800 x 1200 pixels. Encased in protective materials to shield it from rough use, this slate comes equipped with an Intel Celeron N2930 Processor and grabs a fanless design as well. 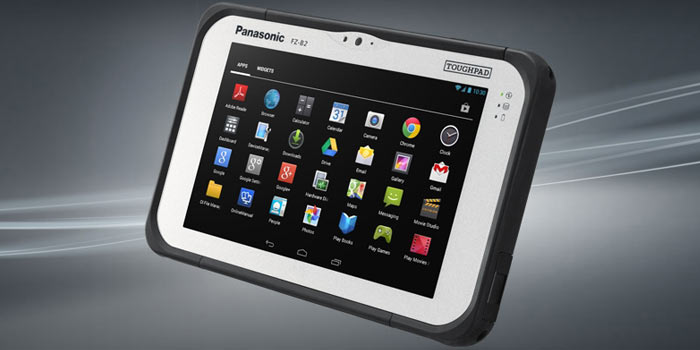 It is shock resistant up to 180cms, whereas it has even been blessed with an IP65 rating for water and dust resistance. Panasonic has revealed that a 3320mAh battery forms part of its offerings, providing its users with 7 hours of usage time. Moreover, for a little extra cost, buyers can even get a hot swap battery pack bundled with the tablet.

Running Android 4.4 KitKat, the Toughpad FZ-B2 integrates a 5MP rear camera which can be upgraded to an 8MP one if you’re willing to spend some extra cash. If its 32GB of storage isn’t enough for you, there’s a microSD card slot built inside it for further expansions.

Here’s a neat look at the specs of the Panasonic Toughpad FZ-B2:

The Panasonic Toughpad FZ-B2 weighs in at 540gms, and ships with a 3-year standard warranty. Like we said, it will be arriving in Europe this December, while its US release will take place in February of next year.