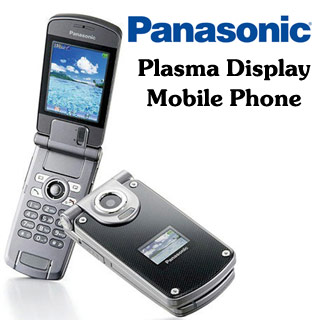 Mobile entertainment is becoming more and more popular now-a-days. With the increasing use of mobile TV, demands of users are raising towards better picture quality on the mobile phone. Apparently this is the reason behind Panasonic coming up with a mobile phone having a Plasma display.

This unnamed phone is especially designed to operate on AT&T’s new Mobile TV service. Panasonic’s new phone will incorporate a low-voltage plasma display into a mobile phone that would deliver richer entertainment to users.

The plasma display on mobile phone is built by AbleComm and will run on 1.5 volts of power. Further Panasonic claims that the plasma display will not require any special wiring or power supplies. The Plasma display is expected to deliver better color and contrast ratios than most LCDs at the same size offer.

This tiny plasma display will be built by AbleComm. Michael N. Marcus, President, AbleComm said, “This is an unexpected and happy coincidence for all of us. Our company has had a long relationship with Panasonic. Several years ago we developed a family of high-efficiency headsets for use with Panasonic business phones, and it turned out that a proprietary component used in those headsets was exactly what Panasonic needed to complete the development of their low-voltage miniaturized plasma displays.”

Such use of plasma displays in mobile phones is expected to be cheaper than usage of OLED displays and will be as thin as OLEDs.

UPDATE: This news was reported to be untrue. Find the latest details here.