New to the KitKat party is the Panasonic T41 smartphone which has hit stores in India for an affordable price of Rs 7449. The handset is the first from the company to offer Android 4.4 out of the box and it’s already available online through Amazon and Saholic.

The Panasonic T41 looks quite similar to the octa core P81, but is much smaller and has a slightly tweaked design featuring smoother curves. Like most OEMs in the budget market, this one has also gone with physical capacitive buttons instead of onscreen ones. The display spans 4.5 inches wide and proffers visuals in FWVGA resolution. 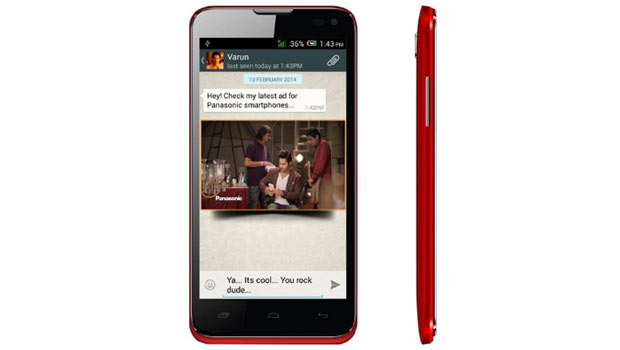 Additionally, a VGA camera can be found on the top-right corner and if you flip to the rear, there’s a 5MP snapper with LED flash at the top-center. While the phone’s design is pretty alluring, the internal hardware is basically the same as what you’d find on most other budget phones.

A 1.3GHz quad core processor is accompanied by 512MB of RAM, 4GB storage and a microSD card slot. Then there’s dual SIM support along with the usual connectivity radios like 3G, Wi-Fi, GPS and Bluetooth, and a 1650mAh battery.

While Amazon has the Panasonic T41 in stock only in black and for Rs 7500, Saholic is offering it in black white and red options for Rs 7449.