Several manufacturers have been trying to come up with a decently feature-loaded camera, neither over-stuffed nor under-nourished. One such attempt is the Panasonic Lumix DMC-TZ10. We tossed the TZ10 into our review pans to know if the camera can satiate the taste buds of photography buffs. So that those with a photography streak within them are offered a plethora of choices in the digital camera arena to pick from. The camera segment has it all, from the sweetest to toughest and meanest cameras. 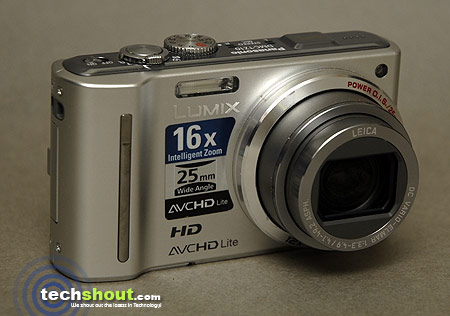 We received the Panasonic Lumix DMC-TZ10 in a dark blue packaging that was spacious enough to house a camera unit, battery, USB 2.0 cable, A/V cable, battery charger with power cable, wrist strap, manual and software disc. The camera is capable of capturing images with its 12.1 megapixel sensor which is accompanied by an optical zoom of 12x.

Well, the Panasonic camera can’t be called pocketable but it isn’t too bulky either. The metal body feels quite sturdy in palms and comfortable to grip even for a longer time. The f/3.3-f/4.9 Leica lens, equivalent to 25-300mm, is located on the extreme right side of the front surface while the left side shows off its features lettered on stickers. Just above these stickers, ‘LUMIX’ is sculpted (slightly outwards). On moving upwards, the flash takes a seat comfortably. The autofocus sensor is placed to the further top left of the camera surface.

The left edge of the camera houses a flap window that reveals USB and HDMI ports on opening, alongside a slot for wrist strap. Looking at the top edge of the camera, GPS has been imprinted on an outward projecting box that clearly indicates the location of the GPS receiver. To the right of the GPS is the microphone while the left side shows off the speakers. The mode dial is affixed on the top, and alongside runs a huge shutter button encircled by a zoom ring and power slider switch.

The lower edge has a compartment for the battery and SD card slots with the tripod mount. The Panasonic Lumix DMC-TZ10 camera sports a 3-inch color LCD display and all the function buttons are placed on its right side. Among these buttons, the topmost portion is housed by a switch that lets users swap between play and shooting modes while the thumb rest is given space right next to it. The dedicated video capture button painted in red has been embedded right below the switch beside the exposure button. A set of five buttons in a circular fashion include – Exposure Value, delayed shutter trigger, Macro mode, Flash on/off and a Menu/Set button. Next to the display button at the bottom, the Quick menu (Q. Menu) is affixed that allows quick access to all frequently accessed functions. It also serves as the delete button. One may also notice an LED embedded next to the display button which indicates the status of the GPS. 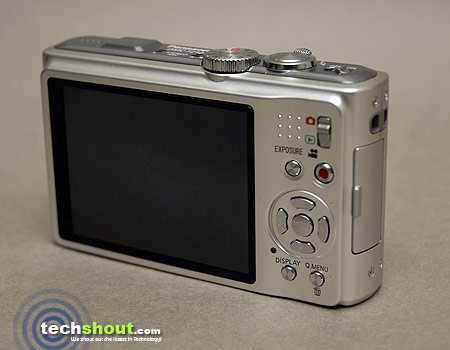 Another contemporary addition is the support for HD video recording at 720p with stereo sound. The dial affixed on the top side is imprinted with Intelligent Auto (iA), Scene mode and others found in most of the cameras these days. The iAuto is similar to the Auto mode that selects the best possible settings. We could select the Shutter speed from 1/2000 second to 60 seconds. The Scene mode lets you choose from 29 preset scene modes while aperture priority mode allows users to adjust the aperture from F3.3 to F6.3.

The image stabilization in the Panasonic Lumix TZ10 has been enhanced and is known as Power O.I.S. The built-in GPS receiver enables geo-tagging photos and videos. The Power O.I.S. was a relief to some of our folks with shaky hands while the Intelligent Resolution Technology and Intelligent Zoom helped to enhance the images taken using the digital zoom. The Macro mode lets users shoot objects from a mere distance of 3cm. The hi-speed shutter mode enables taking pictures of fast paced vehicles. However, we didn’t find it effective.

The dial is inclusive of two scene modes which enable users to select and set two scenes in My Scene Mode 1 and 2. Then on, the custom mode let us store three preferred shooting settings in the camera. Clipboard function adds to the convenience and fun. Further, one can choose from Program mode and Manual mode.

On zooming, the images aren’t anything out-of-the box but emerge pretty decent. The ISO sensitivity modes also let us choose among 80, 100, 200, 400, 800 and 1600. However, photography enthusiasts may notice the missing Auto mode. The full HD video enabled users to record movies in 720p at 30 fps in AVCHD Live format. We could also choose from various scene modes while recording. The video shooting ability supports autofocus and optical zoom functionalities. We tried our hands at the night mode and the result was grainy and unclear images. 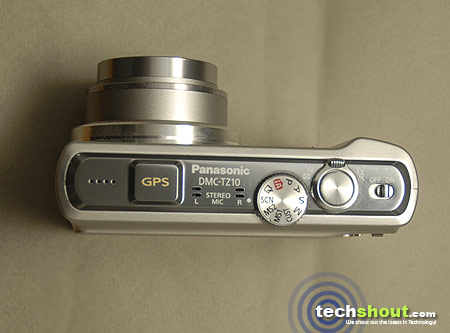 The GPS receiver integrated within the device is yet another appreciable element. It can be switched on and off, depending upon one’s preference. The Panasonic Lumix DMC-TZ10 tags along several other features which have almost become mandatory and seen in most of the cameras these days. These attributes include Smile Shutter, Face Detection and Red Eye Removal. The noise levels are well maintained be it taking snapshots or recording videos. The camera is quick enough to start when turned on. However, manual focus goes amiss and you have to rely on autofocus. Moreover, it didn’t always seem accurate.

All in all, the image quality is maintained pretty decent and color of the images seems vivid. The controls are easy to use and so is the interface. It didn’t take a long time to get the hang of it. The battery life appears pretty decent and allowed taking around 300 snapshots as stated by the company. However, do not expect the same with the GPS unit on.

The snapshots taken with the TZ10 emerged pretty decent.

The camera is loaded with feature options.

The device is decently stylish. Though not a pocket-friendly, the TZ10 could effortlessly accompany one in their purses and handbags.

The noise levels are maintained low while the 12x zoom works effectively.

After a complete hands-on, the Panasonic TZ10 can be called a pretty decent camera to clutch. There are functions that one may not find effective or rather not find at all. Nevertheless, it is capable of taking good snapshots and definitely loaded with features. The interface also brings along ease-of-use. However, the price tag of Rs. 24,990 seems outrageous. We would expect a higher level of performance and much more from a device in that price range. On our rating scale, the Panasonic Lumix DMC-TZ10 gets an 8 on 10.