Japan has just witnessed the launch of the Panasonic CF-MX3, a convertible laptop much like Lenovo’s Yoga devices. This product will run the Windows 8.1 OS, and will be seen going on sale in the said country this Valentine’s Day, although there’s no word on the price tag it will be carrying.

This convertible can work as a laptop, and with its screen turned completely it can assume the form of a huge tablet as well. In this mode, the pen support for its 12.5-inch touchscreen monitor will definitely come in handy. What’s interesting is that Panasonic has somehow managed to squeeze in a DVD drive inside the CF-MX3 which is kind of a rarity for such products. 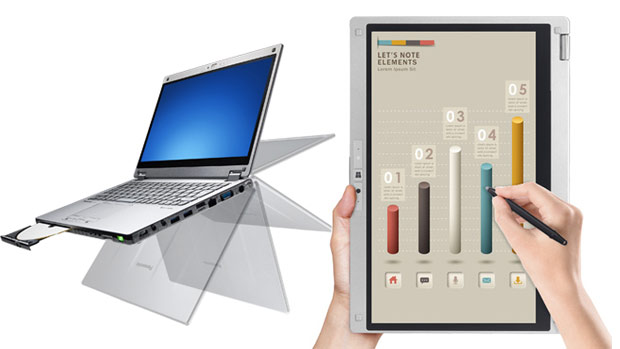 As revealed by Engadget, the laptop’s LCD screen showcases its visuals with a full HD resolution. As for the battery, it’s a removable one and is supposed to last 14 to 15 hours on a single complete charge. The most basic version of the Panasonic CF-MX3 offers a 2.6GHz Core i5-4200U processor, 4GB worth of RAM as well as a 128GB SSD.

Buyers will also be given the choice of doubling the memory and storage, whereas they can even choose to equip their laptops with a 3.0GHz Core i7-4500U CPU and a Pro version of Windows 8.1. Weighing in at around 2.65 pounds, the machine also offers two USB 3.0 ports, one HDMI port, one VGA port and an SD card reader.

At the moment, there is no information regarding the Panasonic CF-MX3’s debut in nations other than Japan, but we can expect it to be announced for other countries soon.