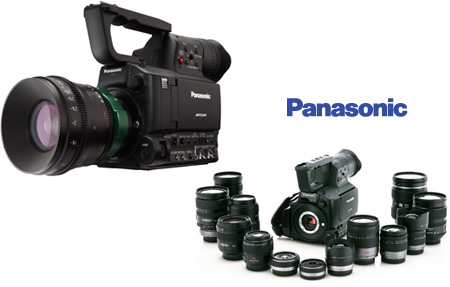 If there’s anything that has photo-enthusiasts double checking their DSLRs, it’s got to be glitch with aliasing. Of course, moiré is a problem thereafter too. Panasonic dons the mask of Santa as their secret gift for filmmakers this holiday season is a new large imager cinema camera that appears to take care of all this and more. Dubbed AG-AF100, this new affordable device is fitted with an enhanced, custom-tailored 4/3” sensor offering performance along the lines of a 35mm movie camera.

Claimed to be the first professional micro 4/3-inch video camcorder that has been designed just right for HD video recording, the new Panasonic AG-AF100 innovation is intended at film and video professionals. It shows off a shallow depth of field which is quite film like and has a wide field of view courtesy of its 16:9 MOS imager. It is this very attribute that also keeps aliasing and moiré in check with an optical low pass filter. Incorporated with full HD 1080/720 capabilities for advanced video recording along with native 1080/24p recording, the camera boasts of variable frame rates and improved audio capabilities too.

Compatible with SDHC and SDXC media, users can anticipate the camcorder to record in AVCCAM’s HA (17Mbps) and HE (6Mbps) modes albeit 1080i only. What’s more it’s switchable between 60Hz and 50Hz too. The SDXC media card compatibility is a first for a device of this kind and the duo of included SD slots should enable users to continuously record for a maximum of 12 hours on two 64GB SDXC cards in PH mode. Still images are captured as two megapixel pictures having a resolution of 1920 x 1080. Thanks to the 4/3-inch lens mount, users can employ a range of low-priced still camera lenses in addition to film-style lenses. With an integrated stereo microphone, the device houses switchable XLR inputs with +48V Phantom Power and two mic/lines.

In addition to this, users can also benefit from the changeable Film Cam and Video Cam modes. On the ISO settings front, the range is expansive and can be tweaked between ISO 200 and ISO 3200 in Film Cam while in Video Cam it can be gain adjusted between 18dB and-6dB. There’s the option of variable, 5600K or 3200K of White Balance too. The enhanced feature list doesn’t end at that. Users can look forward to Dynamic Range Stretch in all modes, integrated optical ND filter, a total of six customizable scene files and user changeable shutter speed and Syncro-scan function. It sports a variable angle color LCD monitor rendering high resolution content with a tilt-able viewfinder. The AF100 tips the scale at a mere 3.5 pounds minus the battery or lens.

A mouthful of solid-stated recording modes accompany the conventional professional interfaces such as 8 Bit HD-SDI out, 4:2:2, USB 2.0 and HDMI out. It also features a trio of User Buttons that are programmable for a maximum of 14 functions. It further packs in a wireless infrared remote controller, ability for metadata recording and a battery interface that can snap up to four hours on a 5800mA battery.

The Panasonic AG-AF100 comes with a three-year limited warranty for the AG-AF100. It bears a suggested list price of $4,995.