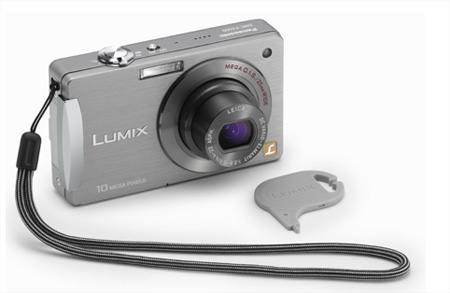 Panasonic has announced the launch of the 10.1 mega pixel Lumix DMC-FX500 digital camera in the US market. This digicam happens to be Panasonic’s first digital camera to sport a 3-inch touch-screen LCD.

Panasonic’s Lumix FX500 digital camera has a hybrid control system that combines joystick control with touch-screen operation, allowing users to make fine adjustments just by touch using their finger or the Lumix stylus-pen that comes bundled with this digicam.

In manual exposure mode, adjustments can be made using the on-screen sliders to adjust aperture and shutter speeds. Users can also set the auto focus and exposure in frames just by touching on the subject, on screen while recording.

Further, in playback mode, a new Easy Organization menu allows for photos to be selected and viewed by scrolling thought the thumbnails located below the main window, after which users can edit the titles using an on-screen keyboard.

The presences of the ultra-wide-angle lens with a 25mm wide-angle lens allows users to capture almost double the photo area at the same shooting distance compared with conventional 35mm lens.

Another newly added feature is Auto Focus which tracks the photo subject even if it movies after the AF is set. Panasonic’s iA (Intelligent Auto) mode is an advanced system of technologies that engage automatically, so that the users does not have to change any settings.

The Panasonic LUMIX DMC-FX500 digital camera comes in black and silver and will be available in May 2008 for $399.95.