The blogosphere is abuzz with the latest leak of the new Palm Treo Pro, previously dubbed as the Palm Treo 850. The leaked images reveal a sassy, gleaming, and a slimmer Palm smartphone, very much unlike the earlier, thicker Palm business phones. 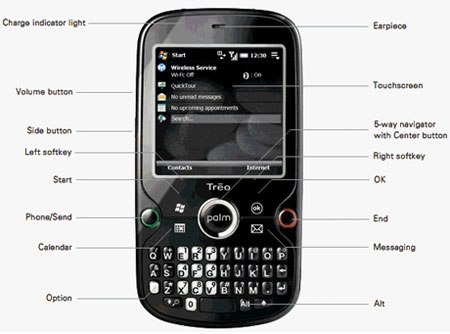 Apparently, the smartphone is a Windows Mobile 6.1 powered phone. The Treo Pro sports a touch screen, comes with a 320×320 screen, microSD expansion slot, camera, a micro USB connection dock and Wi-Fi and ofcourse the QWERTY keyboard, 3.5mm stereo headset jack. It is also rumoured to be a 3G GSM (UMTS/HSDPA) handset.

Looks wise the Palm Treo Pro looks a better, sparkling neat and uncluttered version of Palm Treo 800w. Touted as the best-looking smartphone from Palm, it is speculated to be in competition with the recently launched BlackBerry Bold and iPhone.

Considering the competition, there were reports of business segment not opting for the full-touch screen phone because of the lack of a full QWERTY keyboard. This sets the competition straight between Bold and Pro and with the style that Treo Pro carries; it definitely looks like the Pro is set to impress the style conscious business class.

The Palm Treo 850 smartphone is yet to be officially announced Palm and yet it is the much awaited smartphone.