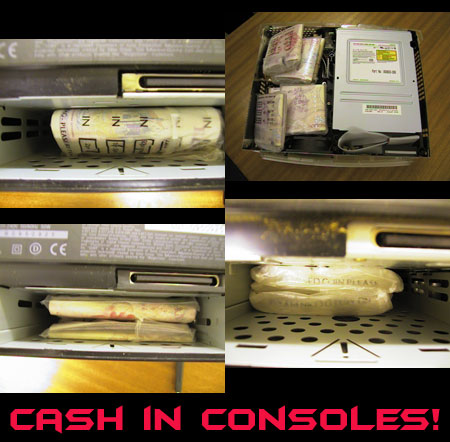 A few days back a raid investigating a man who was apparently running an illegal business of trading Sony PSP SD memory cards and chipping offenses, was held. However on investigation, more than £12,000 in cash was found shoved into a Microsoft Xbox console and three PS2 game consoles.

The raid took place on Monday 14th January at the man’s house in Tower Hamlets. The truth came to light when the consoles which were held by Tower Hamlets Trading Standard investigators and officers from the Metropolitan Police, were handed over to ELSPA (the Entertainment & Leisure Software Publishers Association) IP Crime Unit investigators.

After the normal procedure, the ELSPA investigators started checking for evidence of circumvention devices (chips) and altered hard drives. However to their astonishment, they found a number of plastic bank bags, each comprising of thousands of pounds sterling in note form.

And as though this wasn’t enough, the man was caught with 75 PSP games on SD memory cards and was additionally also offering an Xbox and PlayStation 2 chipping service

Michael Rawlinson, managing director of ELSPA, commented: “I’ve heard it all now. It never ceases to amaze ELSPA and its investigators the lengths criminals go to make money – and always to the detriment of honest, hard working businesses. I congratulate Tower Hamlets Trading Standards on bringing to an end this illegal business operation.”

A POCA (Proceeds Of Crime Act) inquiry has already kicked off to gauge the criminal gain from his illegal activities.

Now stop running to your consoles. There’s nothing stuffed in there for sure!