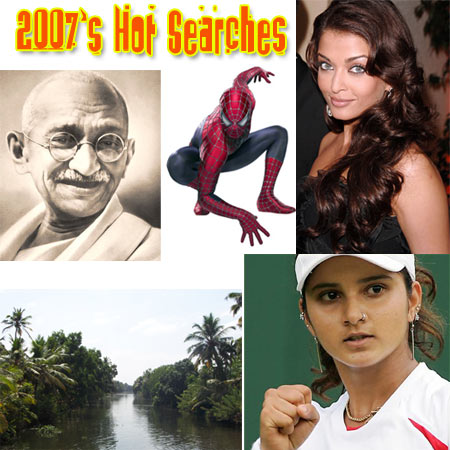 We have now reached that time of the year when the “bests” of 2007 are to be announced. From the best films to the best tracks of 2007, it’s the final evaluation of whether you or your work has been able to make a mark for itself in the year or it’s just been another run-on-the-mill affair. Well amongst all this, how could Google be left behind! The yearly “Year-End Google Zeitgeist” top ten list is no big deal, Google has being doing that since quite some time now, so what’s special this time around?

Well, for the very first time, the internet giant has released its first ever annual Google Zeitgeist report for India, which will include the fastest rising and highest volume search terms that users from India have been submitting to Google, in 2007.

The most popular and fast-rising search queries submitted to Google by Indian users is the criteria considered whilst deciding on the Google Zeitgeist list.

Terms that grew tremendously in 2007- the explosive queries, the topics that everyone was fixated at were taken into consideration. Also a proportionately higher score was given to searches with more traffic increase. Google India also computed the most popular queries in 2007 by volume. These category based lists given below on Bollywood celebrities, movies, holiday destinations etc. are the absolute most frequent searches in those categories.