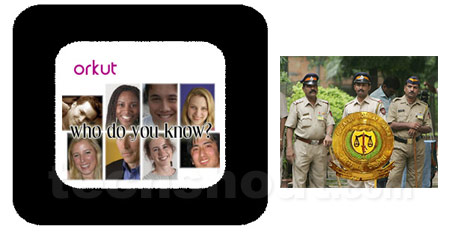 These days, Google’s social networking site, Orkut, has been in the news for a number of reasons, that too for all bad reasons. First it was the Anti-Shivaji and Anti-Ambedkar communities on Orkut that angered many Indians. Then it was the Bombay Scottish school kids who shot to fame with their infamous community on their principal. These issues have been confounding the Indian authorities for a while now, and besides blocking the objectionable forums, the Mumbai Police could do little. But, now the Mumbai Police are finally equipped to track down such offenders and are able to bring them to book.

With just a single email containing the IP addresses of the Orkut offenders, between the DCP in charge of the Enforcement Branch and Orkut, a number of Orkut offenders will soon be nabbed.

A meeting was held between representatives of Orkut and the Enforcment Directorate, after which the Mumbai Police and Orkut entered into an agreement to seal such cooperation in matters of objectionable material on the Internet.

According to DCP Enforement, Sanjay Mohite, “Early February, I met three representatives from Orkut.com, including a top official from the US. The other two were from Bangalore. We reached a working agreement whereby Orkut has agreed to provide us details of the IP address from which an objectionable message or blog has been posted on the site and the Internet service provider involved.”

Besides, an encrypted code has also been agreed upon for such communication to prevent people from posing as the Mumbai Police. “I am also going to hold a meeting with all Internet service providers to stress the need to share information. We are also hoping to rope in YouTube in the future,” said Mohite.

Earlier, if a complaint regarding objectionable content was received, the police would contact the computer emergency response team, a government body based in New Delhi, and ask it to block the concerned web page. They did not have any way to track down the culprits.

“It was almost out of the question to track down the person who posted the material as we would have to go through the CBI to get basic information from Orkut as they are based in the US. The entire process of letter rogatory would come into play. But now we can take action on any content posted on the site from India,” he explained.