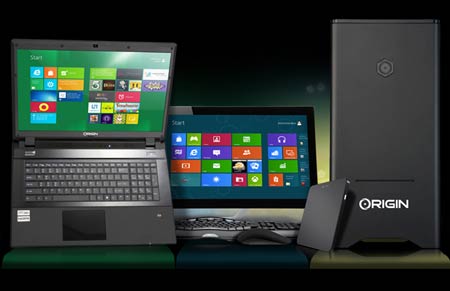 Origin PC has announced that it is now shipping computer systems with Windows 8 that is redesigned to offer a new and improved user interface. The company has deployed Microsoft’s platform in its lineup of desktops and laptops meant for professionals, artists, enthusiasts, gamers and more.

The new operating system is designed to bring fresh features like fast boot up times and cloud connectivity in addition to multi-touch support. It is based on its prequel, that is, Windows 7 and thus can be expected to deliver the same or better performance. The main OS interface pops out the Start menu which has naturally been loaded with applications that are frequently accessed by users.

The multi-touch support of the new iteration should allow customers to take full advantage of the trackpad embedded on the EON17-SLX laptop from Origin PC. This notebook is outfitted with a backlit keyboard and flaunts a 17.3-inch FHD LED backlit glossy display that can render visuals in a 1920 x 1080p resolution. Compatible with Windows 7 as well as 8, it can support up to 32GB of RAM and can be configured with Intel Core i7 processors for improved performance.

Besides the aforementioned laptop, the company has also refreshed its lineup of desktops featuring full-size, mid-size as well as small form factor PCs. These Windows 8-based computers are available with the latest generation Intel as well as AMD processors and can be customized with up to quad core GPUs.

Although Origin PC has refreshed its lineup with the Windows 8 OS, the company will continue to sell devices featuring the Windows 7 platform.