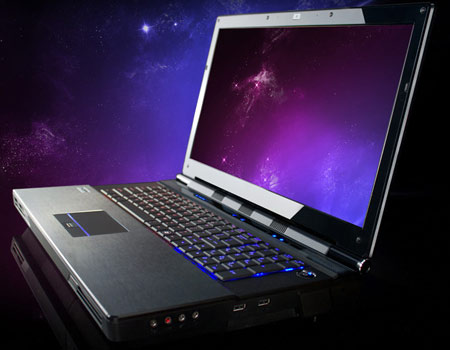 The all new Origin PC EON17-X3D is the 3D version of the company’s ‘desktop replacement laptop’ that was let into the market not too long ago. Featuring dual graphics, it packs in second generation Intel Hexcore processors and the Intel X79 chipset.

The laptop is the first 3D one from Origin PC that incorporates a customizable, backlit keyboard with three lighting zones and no less than seven color options. And the company’s also laying out the bait for gamers with the dual overclocked Nvidia GeForce GTX 580M graphics card in SLI configuration, showing on the specs sheet.

“Origin PC continues to lead the industry by being the first to offer a 3D laptop with dual overclocked graphics cards in SLI,” expressed Kevin Wasielewski Origin PC CEO and co-founder. “The Origin EON17-X3D is the ultimate mobile 3D experience. Whether you are at home or on the road, you will forget where you are and become immersed in the world of 3D.”

The notebook is fitted with an in-built 3D emitter and 1080p 3D display. In terms of hard drive customization, potential users will be able to opt for up to 3TB of hoarding space. Also mentioned among the key attributes are up to 16GB 1866MHz Corsair Vengeance quad channel memory or up to 32GB 1333MHz Corsair quad channel memory.

The Origin PC EON17-X3D price starts at a rather weighty $3,032 and it’s covered by a 1 to 3 free part replacement warranty. It looks the company will be shipping it with Nvidia Vision 2 wireless glasses integrating LightBoost technology.