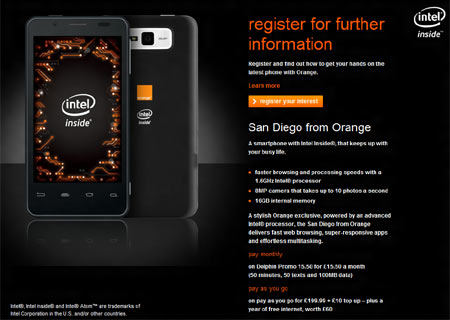 The previously codenamed Santa Clara smartphone now has an official moniker – they’re calling it the Orange San Diego. The handset will be up for grabs starting June 6 throughout the UK for a price of £199.99 with a pay as you go subscription.

Being the first Intel powered smartphone to make its debut in Europe, the device in question packs in the Atom processor Z2460 and comes bearing support for HSPA+ connectivity through the Intel XMM 6260 platform. The rear-facing 8MP camera is not only said to be capable of capturing 10 pictures in approximately a second, but also recording videos in 1080p full HD resolution. It even features image stabilization for obtaining better pictures.

“We congratulate Orange on the launch of their ’San Diego’ smartphone with Intel inside,” commented Mike Bell, Intel Vice President and General Manager of the company’s Mobile and Communications Group. “Orange is truly a progressive operator who has its finger on the pulse on its customer base. The new Intel-based smartphone exemplifies Orange’s focus on delivering a well executed product to its users, from the quality and feel of industrial design to the overall software and applications experience.” 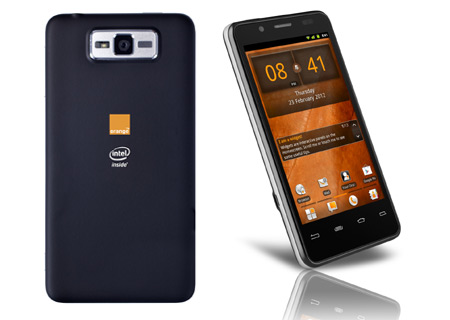 In addition to HDMI, A-GPS and Bluetooth 2.1 connectivity, the handset is accompanied by the mobile HD voice attribute. Through the 4.03-inch capacitive display, users will be able to access applications or services with simple gesture inputs, courtesy of Orange Gestures.

The Orange San Diego price sums up to £199.99 for pay as you go subscribers who are also entitled to 250MB of free data for a period of 12 months. What’s more, until July 25 2012, the handset can be picked up free of cost for customers who opt for the £15.50 per month, 24-month price plan. This package comes with 50 minutes of talktime to any network, 50 texts and 100MB of data each month. The smartphone will be available for purchase in the UK from June 6, 2012 onwards, as previously noted.