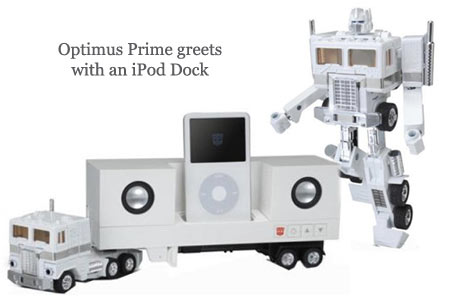 Gadget makers are fascinated with the iconic figures from the movie Transformers. After targeting mobile phones in the shape of Transformers, the Optimus Prime re-invents himself in the form of an iPod dock.

The Convoy iPod Docking Bay is a great surprise when it bends and molds with ease into the robot man Optimus Prime. The iPod dock has been given a stamp of approval with its license from Apple. The device has two speakers and allows standard size iPods to mount in the centre of the truck between the two speakers. Though the dock does not support the iPod shuffle, which is a big let down. The Optimus Prime also carries along with him an AC adapter cord which is included in the package.

The Optimus Prime iPod dock adopts a fresh look in fully white shades which synchronize well with the gigantic Apple brand. At a shipping weight of 3.22 pounds, the device is ready for a sale over the internet at a cost of $145 USD.