The Oppo N3 has been in the spotlight a lot during the past few weeks, and there have been a few conflicting accounts on what kind of a design its maker will use for the unique rotating snapper. But now, all those rumors have been laid to rest by the Chinese company, even as it has released a render showcasing the swivel camera mechanism of the upcoming smartphone.

The image we’ve posted in the space right below comes from Oppo’s official Weibo account. It shows a faux leather finish with a stitch design having been wrapped around the portion that houses the device’s camera module. Just like its predecessor the N1, this model too will kick in a dual LED flash system. 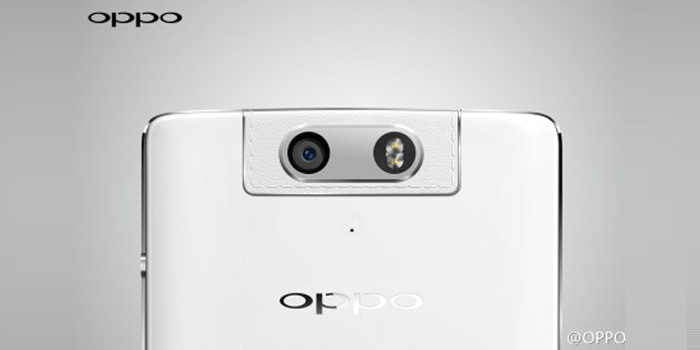 Since it’s the famed swivel camera that’s present on the handset, users will be able to use it on both sides of the Oppo N3 by just rotating the module. So there’s no need to equip the phone with separate cameras for the front and back.

Specifications on the device are still unknown at the moment, but they’re expected to be pretty high-end. The company has told us through short teasers that the phone will be made from ‘aerospace grade’ material.

Also Read: Oppo N3 to be made from ‘aerospace grade material,’ says company

Its predecessor, the N1 comes equipped with a 5.9-inch 1080p full HD display and a quad core Qualcomm Snapdragon 600 processor. There’s 2GB worth of RAM onboard, apart from 16 or 32GB of expandable storage. It rotating camera houses a 13MP sensor.

The Oppo N3 is slated to be officially unveiled on October 29 at an event in Singapore. That’s when you can expected all to become clear about the handset.