The long-rumored Oppo F1 Plus FC Barcelona Edition has finally been unveiled. This branded version of the smartphone is supposed to go on sale mid-June, and its pricing will only be revealed closer to its release date.

While nothing changes inside the device of course, the exteriors get a coat of new paint to match the Spanish football club’s iconic gear. Additionally, the Oppo F1 Plus FC Barcelona Edition also grabs an 18K gold-plated crest of the club on its rear surface.

And that’s not all; those who end up buying this unique smartphone will also be provided with an exclusive case for it by Oppo. This will have the signatures of players Lionel Messi, Neymar, Luis Suárez, Ivan Rakitić and Andrés Iniesta laser-printed on them. However, these will all be on the inside; so you’ll have to remove the case in order to flaunt them.

A quick glance at the key specs of the Oppo F1 Plus FC Barcelona Edition: 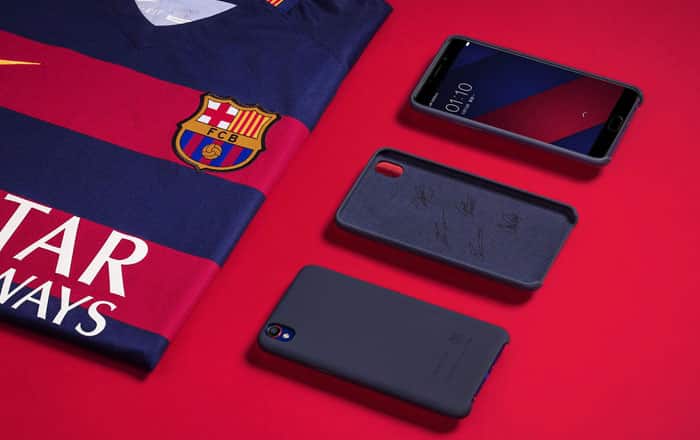 That said, nothing will change for handset itself, as it’s the same F1 Plus underneath its freshly painted body. So you’ll be getting the powerful Helio P10 chipset that will be accompanied by 4GB worth of RAM. While its primary camera is a 13MP unit, the front snapper is 16MP for this selfie-focused phone.

Like we said, pricing details of the new Oppo F1 Plus FC Barcelona Edition will only be available closer to its release which should take place mid-June.