While we’ve been speculating about the Oppo Find 7, the company has been slowly revealing details about the upcoming flagship through teasers. The latest bit of information divulged confirms a previous leak which suggested that the smartphone will arrive with two different display choices, 2K and 1080p.

The Oppo Find 7 was expected to go official at the MWC 2014, but didn’t show up. A new launch date was disclosed through the company in the form of a hidden message in a teaser image which hinted that the smartphone will go official on March 19 in Beijing. Oppo recently shared a new image on its Weibo account where two display resolutions are mentioned, 1920 x 1080p (FHD) and 2560 x 1440p (2K or QHD). 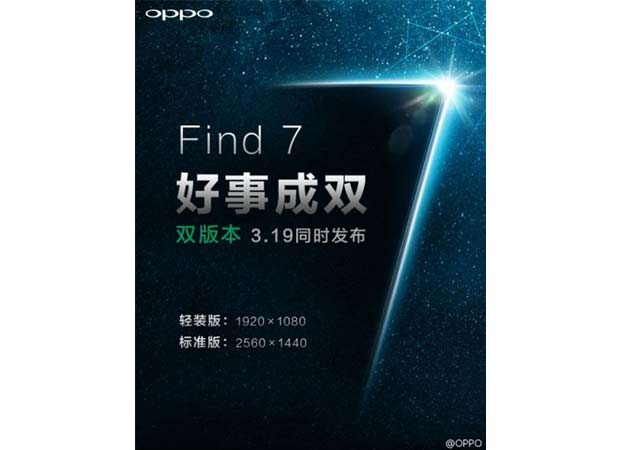 G 4 Games reports that the Oppo Find 7 with the FHD panel will be considerably cheaper than the quad HD variant. What isn’t certain is whether both models will be available globally or in specific markets. A previous rumor suggested that the device will sell for under $600, but no specific version was mentioned. The QHD variant will go by the model number x9077. This device will be powered by the Snapdragon 800 MSM8974AC SOC clocked at 2.5GHz, while the 1080p one (x9007) will have the 2.2GHz SMS8974 chip.

Both models of the Oppo Find 7 will run on Android 4.3 Jelly Bean and feature 3GB of RAM, 16GB of storage and Adreno 330 graphics. In recent news, an image of 50MP resolution (8160 x 6120p) was spotted online which is said to be captured from the handset in question based on the EXIF data. Could it be that the Oppo Find 7 will have a high performance camera to take on the mobile photography champ, the Lumia 1020? 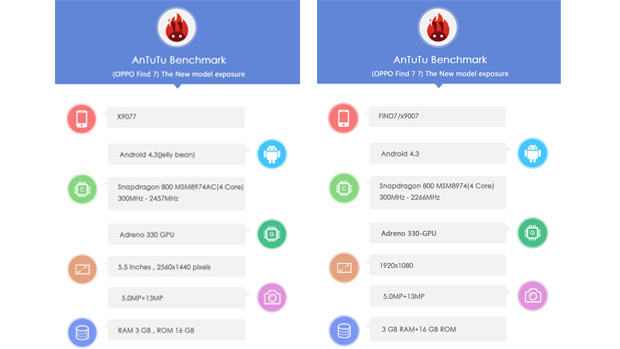 Everything we need to know about the Oppo Find 7 will be disclosed on March 19, unless new leaks decided to do the needful beforehand.