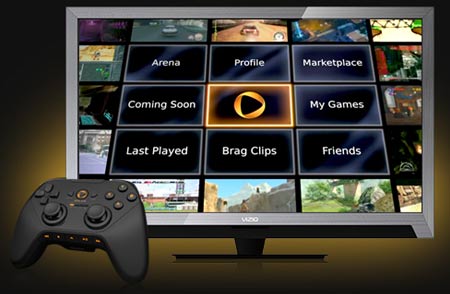 ‘OnLive’ appears to be the new word for on-demand cloud-based gaming these days. It looks like the word’s not just going to be on almost everyone’s lips, but also on every other Vizio offering. According to the official OnLive blog, the OnLive Game Service will be incorporated into new Vizio Via Plus TVs as also the company’s Via Blu-ray players, Android tablets and smartphones.

Users can expect the same sort of instant gaming experience already offered by the OnLive MicroConsole TV adapter, PCs, Macs and Apple iPad devices. Games played through OnLive may be synced across platforms so that players have the option of resuming where they left off on another device. Since the service is of the cloud-based ilk, matters such as future OnLive-integrated Vizio TVs being able to run newer games shouldn’t be of much concern.

The OnLive Game Service will be showcased at the CES 2011 with SRS 5.1 Surround Sound which works with SRS or even non-SRS surround sound decoders. SRS 5.1 surround sound will be offered as a free update to all users in early 2011 whether it’s welcome or not since it’s an automatic upgrade. It’s not like anyone’s going to complain about that though.

The first OnLive-integrated Vizio gadgets are scheduled for launch at a later date this year. Additionally, the OnLive Game System is slated to be available at a 33% discount along with a promo code for one Full PlayPass right through the CES. So it’s $66 for the system and a promo code that needs to be utilized by January 31.