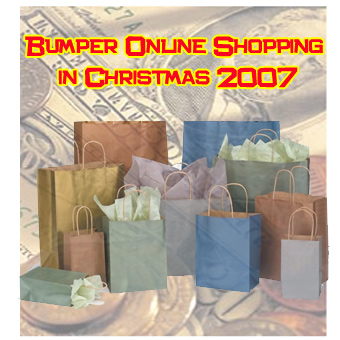 Shopping, shopping and some more shopping seems to be the mantra this year and perhaps every Christmas season. And online shopping has made life so much easier!

comScore, a digital world analyst has released a report that notes that a week prior to Christmas 2007, shopping on the internet increased by up to 25 percent, as compared to what it did in 2006 during the same timeframe. From November 1st and December 21st, shoppers in the U.S. shelled out as much as $26.3 billion shopping online. This figure marks a 19 percent rise as compared to 2006.

Cyber Monday, which is the term coined in the U.S. to refer to the first workday after the Thanksgiving holiday, was ranked as this winter holiday season’s 9th heaviest online shopping day, with $733 million in sales. This day is regarded to be the beginning of the online holiday shopping season.

On the whole, comScore has projected that 2007’s holiday season will most probably generate around $29.5 billion in online shopping, which is a 20 percent rise as compared to the same timeframe in year 2006.