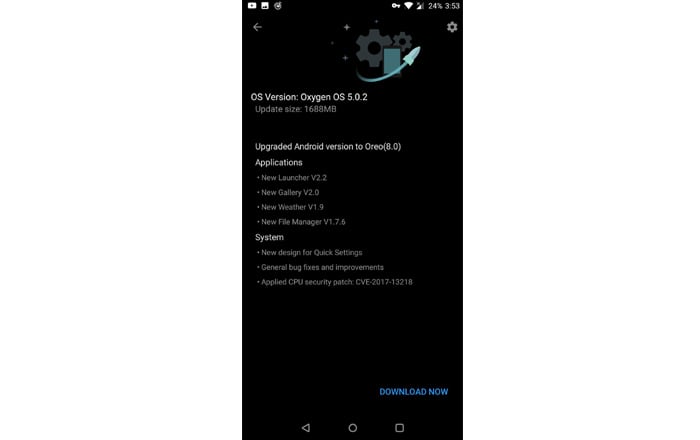 Both the OnePlus 5 and OnePlus 5T have gotten updated to OxygenOS 5.0.2, bringing the highly anticipated Face Unlock feature to the former and Oreo upgrade to the latter. It’s an incremental rollout for the pair, so it’ll reach a small pool of users first before expanding to everyone over the next couple of days.

OxygenOS 5.0.2 is the first official Android 8.0 update for the OnePlus 5T after a long beta testing period. OnePlus has already rolled out the OS for the OnePlus 3, OnePlus 3T, and OnePlus 5, so its latest handset is actually getting hold of the promotion last.

Oreo aside, the OnePlus 5T will also be greeted with a new design for Quick Settings, general bug fixes and improvements, and the CPU security patch CVE-2017-13218 to shield against Spectre and Meltdown attacks. A couple of apps have gotten upgraded as well namely Launcher, Gallery, Weather, and File Manager.

As for the OnePlus 5, its OxygenOS 5.0.2 is very similar to the OnePlus 5T with 2 key differences. One is the promised addition of Face Unlock so users can use their face as their password. The second is enhanced EIS (Electronic Image Stabilization) for video recording.

Over in beta land, the OnePlus 5T recently hopped on to OxygenOS Open Beta 3. The build introduced a bunch of new navigation features which are very similar to the ones used on the iPhone X and an SMS organizer for Indian users to sort their messages into categories. The firm also removed the Clipboard app after some claimed that it was sending user data to Chinese servers.

Like we mentioned above, not everyone will be getting OxygenOS 5.0.2 at the same time. Some folks have found luck by using a German VPN or rebooting their OnePlus 5 or OnePlus 5T.