OnePlus One is available in India today without invite

The OnePlus One has been selling pretty well in India and invites haven’t been hard to come by, as far as we know. But if you haven’t been able to secure one for yourself by now, you’re finally going to get a break. For just one day, the company is opening sales to everyone which means that you won’t need an invite to purchase the handset.

And that day is tomorrow with sales for the OnePlus One starting at 10am on Amazon India. The company hasn’t disclosed how many units it’ll be offered under this promo and it hasn’t mentioned at what time the sale will stop – We’re assuming before mid-night, but will confirm. 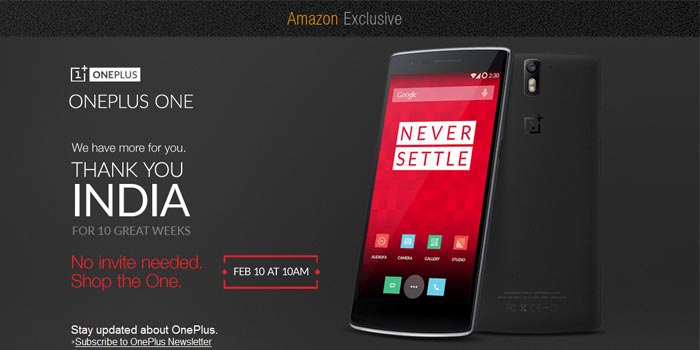 This is the first time OnePlus is opening sales to everyone in India, but it has done the same multiple times already in the global market. According to the company, the new promo is in celebration of ’10 great weeks’ in the country and there will be limited inventory. Also, there could also be a secondary reason behind the company’s actions.

As you probably know, the Xioami Mi 4 handset which offers specs similar to what the One flagship killer packs, but at a lower price of Rs 19999, goes up for grabs tomorrow via Flipkart in the usual flash sale approach. And only a limited number of units will be available. So could it be that OnePlus wants lure customers away from Xioami’s flagship through its latest promo?

As a reminder, the OnePlus One will be available without an invite tomorrow only at Rs 21999 through Amazon.