The OnePlus One smartphone which is to be launched later this year as the first ever CyanogenMod handset has had one more important detail of its revealed. The makers of this device have informed us that the new product will carry onboard a 13MP Sony Exmor camera which will present it with 4K shooting capabilities.

The OnePlus One will kick in a Sony Exmor IMX214 sensor. This 13MP CMOS unit offers a wide f/2.0 aperture which means good low-light performance. Accompanying the setup will be 6 lens optics instead of the conventional 5. The decision to add an extra lens was taken by the manufacturers in order to help the camera take care of any low aperture distortion. 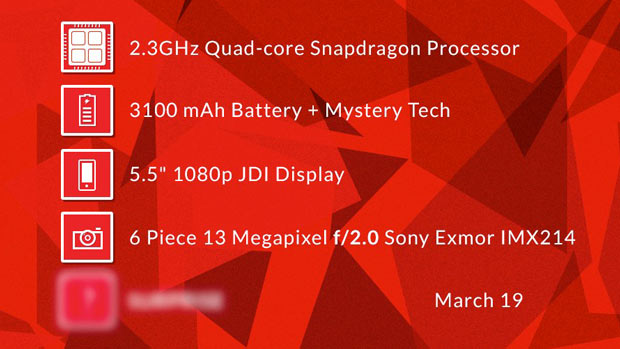 Apart from shooting 4K videos, this snapper will also be capable of capturing slow-motion clips at 120fps, albeit with a 720p resolution. Furthermore, the OnePlus One is to feature a 5MP front camera as well. From what we know about the device from prior details, it appears to be shaping up as a pretty interesting proposition.

Its software will be powered by CyanogenMod, making it a great option for fans of the operating system. Its makers are even boasting that it’ll feature the ‘best’ screen to body ratio. Equipped with a 5.5-inch display, the OnePlus One will offer 1080p HD visuals to its buyers. It will kick in a 2.3GHz quad core Snapdragon processor, and will offer a 3100mAh battery laced with some kind of a ‘mystery’ technology.

The OnePlus One handset is supposed to be launched sometime before the end of Q2. Nothing related to its possible price tag has been said until now.