With less than a month left to go for the official launch of the OnePlus One smartphone leaks are bound to flood the Internet due to its high-profile presence. It’s a known fact that it will carry onboard the Android-based CyanogenMod OS, but what we’re seeing here is most probably our first glimpse of the device’ software.

For those familiar with CyanogenMod distributions, that lock screen will indeed seem a lot unfamiliar. It’s fresh and it does not kick in the standard unlock slider. This difference is probably owing to the fact that the OS has been granted enhancements by OnePlus itself to maintain its originality. 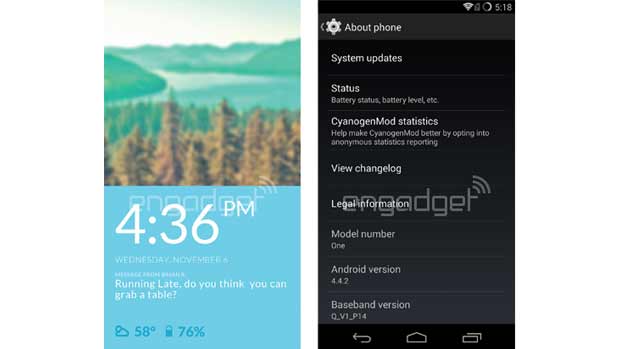 As Engadget – the source of this news – points out, this software is called CyanogenMod 11S. However, traditionally there is no alphabet in the names of these distributions. While the first screenshot proves that a clock as well as information about date, weather, battery level and text messages will be at hand through the lock screen, the second image tells us that this OS is based on the latest version of Android – 4.4.2 KitKat.

The OnePlus One smartphone will be unveiled on April 23, so there’s still lots of time for the much revered leak brigade to do their thing.