The OnePlus 6T McLaren Edition has officially arrived in a blaze of orange and carbon fiber. The phone is the result of a collaboration between the handset maker and the Formula One company, offering a couple of unique features to entice fans of both.

First of all, the OnePlus 6T McLaren Edition has 10GB of RAM inside, 2GB more than the regular OnePlus 6T. The brand has also thrown in a new 30W Warp Charge tech so you can get 50% of power within 20 minutes. In contrast, the standard model achieves the same in 30 minutes.

Another big change is the carbon fiber layer placed beneath the glass back. There’s a McLaren connection here since the racing juggernaut was the first to utilize the material in Formula 1. OnePlus has even lined the firm’s signature Papaya Orange color along the bottom and sides of the phone.

The McLaren logo at the bottom moves and shifts in different lighting conditions as well. Software-wise, the OnePlus 6T McLaren Edition has some exclusive animations, themes, wallpapers, and icons. Meanwhile, the box contains a book called Salute to Speed which covers the history of McLaren and OnePlus. 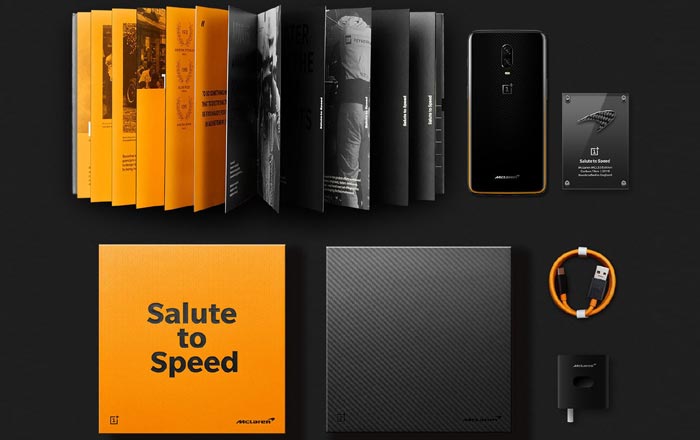 Interestingly, OnePlus shared a video on Twitter showing off the OnePlus 6T McLaren Edition’s AR skills. A digital car can be seen on top of one of the pages of the book, so it appears to be an interactive experience.

None of this will come cheap, but that’s to be expected from OnePlus at this point. It’s priced the McLaren Edition at $699 in the US where the smartphone will go up for sale in limited quantities on December 13 via the brand’s site. This translates to roughly Rs 50249 in India. The official rate will be announced at an event in Mumbai tomorrow.