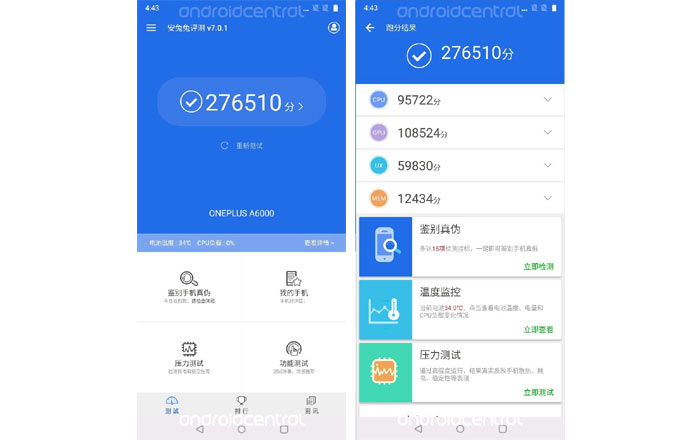 OnePlus might just become one of many Android manufacturers to turn to an iPhone X-like notch design if a new report turns out to be accurate. This has been leaked before thanks to a couple of live photos, and there’s now a bit more evidence of this.

Android Central got hold of screenshots from a source close to OnePlus which allegedly depicts the AnTuTu Score of the OnePlus 6. The images feature the name ‘OnePlus A6000’ which is rumored to be the codename of the brand’s next flagship.

Starting with the score itself, the OnePlus 6 managed to hit 276510 in its evaluation. This beats the Mi Mix 2S’ leaked score, hinting that the former is going to run on a Snapdragon 845 processor. With this over and done with, you should turn your attention to the status bar.

While it may look ordinary at first glance, little details begin popping out upon a closer look. There’s a considerable gap in the middle of the bar. The time has been shifted to the left, while the battery and other icons are squished to the right. This is very different from the current OxygenOS design.

The arrangement also matches previously leaked hands-on images of the OnePlus 6. The aspect ratio is apparently 19:9, close to the iPhone X’s 19.5:9 aspect ratio. Other possible changes include a layer of glass at the back, a fingerprint sensor at the rear, and dual cameras.

OnePlus has already confirmed a roughly June launch for the OnePlus 6, so get ready for an influx of information till then.