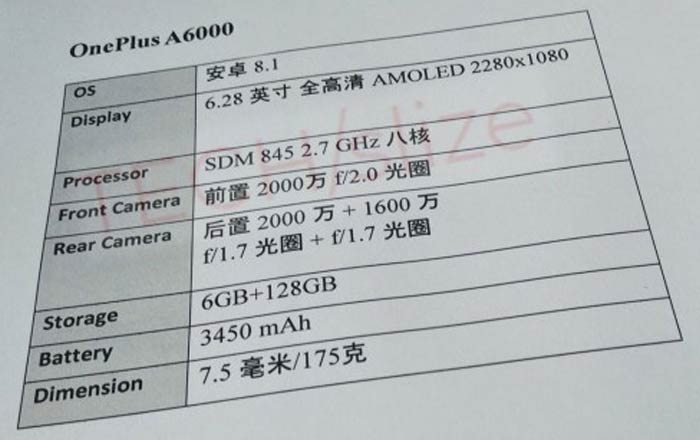 The OnePlus 6’s price got leaked just a few days ago, and now a fresh leak has given away most of its specs. The image just features a single sheet of paper with a list of specifications and the name OnePlus A6000 on top, said to be the codename of the upcoming flagship phone.

These kinds of leaks are easy to fake, so it would be best to take in the details with a healthy dose of salt. According to the sheet, the OnePlus 6 is going to sport a 6.28-inch AMOLED display with a 2280 x 1080p resolution. This closely mirrors the Oppo R15’s notched screen, not a surprise given the similarities between the OnePlus 5T and Oppo R11s.

Oppo and OnePlus are owned by the same parent company, BBK Electronics, so design and hardware elements are typically shared. The latter will probably be adopting a notch design for its device as a result. There is some other evidence of this as well, most notably in firmware files and hands-on photos.

The list also mentions that the OnePlus 6 will rely on a 2.7GHz Snapdragon 845 processor for power and a 3450mAh battery for fuel. It seems the brand is sticking to the same 20MP f/1.7 + 16MP f/1.7 dual rear camera setup as the OnePlus 5T. The selfie snapper has gotten upgraded from 16MP to 20MP.

As per the leak, OnePlus is going to make the smartphone available in a 6GB of RAM and 128GB of ROM configuration. This goes against the OnePlus 5T’s formula of 6GB/64GB and 8GB/128GB models, but there’s no reason why the firm can’t change things up this year.