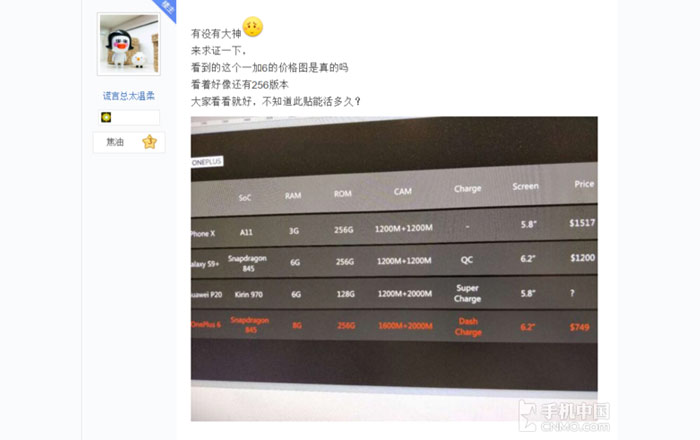 The OnePlus 6 might turn out to be the most expensive handset OnePlus has ever released if a new leak out of Weibo turns out to be anywhere close to the truth. This typically happens with every new phone the company launches, pushing further and further away from the affordable reputation the brand started out with.

The image features a list of flagship smartphones with its price and specs including names like the iPhone X and Galaxy S9+. The OnePlus 6 is at the bottom next to features like a Snapdragon 845 processor, 8GB of RAM, 256GB of storage, Dash Charge support, a 6.2-inch screen, and 16MP + 20MP dual rear cameras.

The cost comes at the very end at $749 which translates to approximately Rs 48840. This is very steep and likely for the ultimate version of the OnePlus 6 featuring 8GB of RAM and 256GB of ROM, as mentioned in the specs. The company will probably out a 64GB or 128GB version as well at a lower rate.

The leak should ideally be taken with a pinch of salt since the source of the rumor isn’t very reliable. It seems the figures listed are the Chinese Yuan rates of the phones converted into US dollars. For instance, the 256GB iPhone X goes for CNY 9688 (roughly $1530) and the 256GB Samsung Galaxy S9+ sells at CNY 7599 (about $1200).

The leak lists the iPhone X and Galaxy S9+’ cost at $1517 and $1200, respectively. This makes the $749 cost of the OnePlus 6 a bit more uncertain since the actual rate might be lower or higher depending on the market.