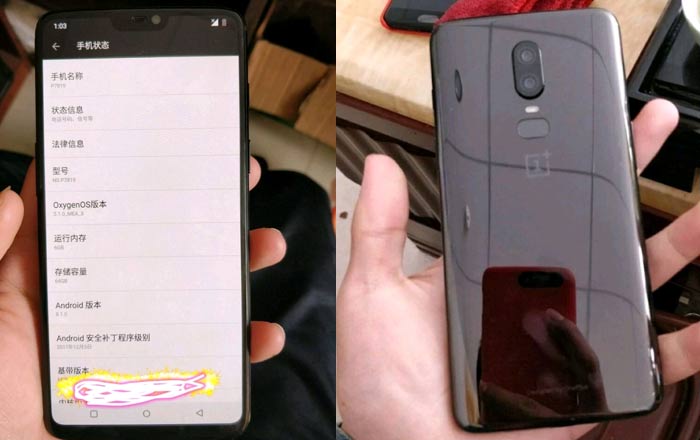 The OnePlus 5T has come and gone, leaving rumor mills to speculate on the company’s next big thing – the OnePlus 6. Kicking things off are a pair of hands-on photos which apparently depict the next generation of the brand’s product cycle.

Going by the snaps, it seems OnePlus is taking inspiration from both the iPhone X and Galaxy S9+. The front is a clear rip-off of the former with its edge-to-edge bezel-less screen and small notch up top. The cutout appears to house the selfie camera and microphone. The time is seen on the left ear, while network strength and battery power are on the right.

The display gives a run-down of the alleged OnePlus 6’s specs. It apparently features on Android 8.1 Oreo with a layer of OxygenOS 5.1 on top of it. Neither is currently available for the OnePlus 5T and OnePlus 5, so the rumored handset seems to be ahead of the pack here.

It’s worth noting that OnePlus utilizes HydrogenOS for Chinese audiences and OxygenOS for the rest of the world. The leak is Chinese in origin, but then the company would be testing both software versions. The device supposedly packs 6GB of RAM and 64GB of ROM.

Moving on to the so-called OnePlus 6’s back, the glossy rear surface looks just like the recently-unveiled Galaxy S9+ thanks to its glass back and vertical dual rear cameras. The fingerprint sensor is one of the few major departures from the Samsung flagship since it’s separated from the lenses thanks to the presence of the flash unit.

The rectangular shape is the same though, a change from the OnePlus 5T’s round fingerprint reader. The OnePlus 6 will be coming out at some point in June, as confirmed by the company’s CEO. We should see more leaks of the smartphone till then, so stay tuned.