OnePlus is celebrating its fourth anniversary in India with style, launching the OnePlus 5T Star Wars Limited Edition for the country and a few others. It’s already gone up for sale on Amazon and the brand’s site, coinciding with the release of The Last Jedi.

The OnePlus 5T Star Wars Limited Edition looks pretty stylish with its Sandstone White back sprinkled with grey specks and shiny red alert slider. The company’s even tying in these colors with the film, claiming that the former was inspired by the surface of the planet Crait and the latter by the red Star Wars logo.

If that’s not enough Star Wars for you, OnePlus has preloaded a bunch of wallpapers and themes to immerse yourself even further. Plus, it’s bundling the handset with a unique case that’s meant to evoke Kylo Ren’s helmet. You’ll need it too, since the firm warns that the phone may show signs of scuffing with daily use. 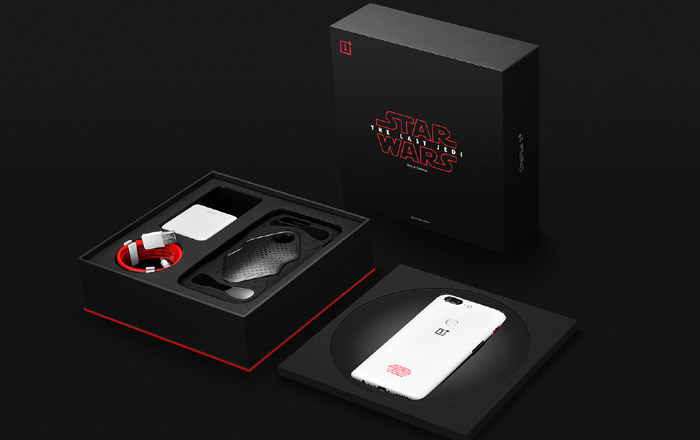 OnePlus’ site is offering a couple of deals to mark its birthday including an additional Rs 2000 cut upon exchanging any OnePlus smartphone, an extra Rs 1000 off for trading in any other device, and zero cost EMIs. There’s also a Rs 1500 Axis Bank debit and credit card discount.

Meanwhile, Amazon India is giving away a year-long Zomato Gold membership, a 12-month Servify Damage Insurance through the Kotak 811 app, 1008GB of Idea data, Rs 250 as Amazon Pay balance after streaming content on the Prime Video app, and Rs 500 worth of Kindle eBooks.